Winter is undoubtedly the best season in which to see owls. This is partly because many trees are bare, enabling better sightings, if you are lucky. But it’s also because in winter some of the owls that usually breed and hunt in the upper forests come down occasionally to the valley floor to find food. We have already taken a close look at Great Horned Owls, the most abundant owl in the area. (See LC Museum blog posting for winter 2014, or “Which Bird Might I See Today Volume I” available at the museum or from my website). 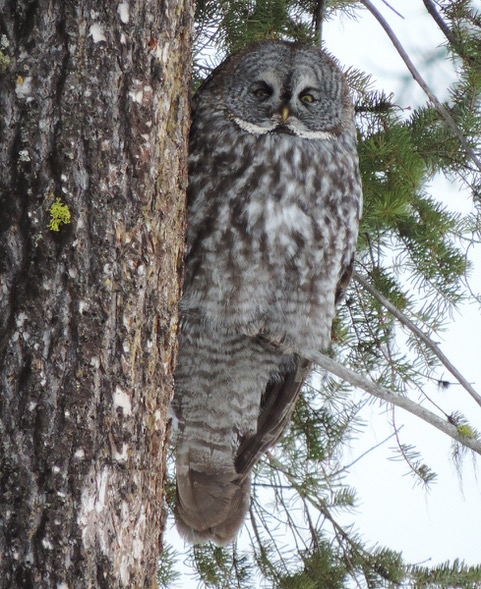 So today let’s look at four of the other owls worth watching for.  Great Gray Owls are even taller owls than Great Horned, with a length of 24 – 33”/~61-84cm and a wingspan of 4.5ft/1.4m. They have excellent hearing, enabling them to hunt rodents even under deep snow. Ranging across the northern forests from Alaska to Quebec and into Montana and Wyoming, these owls usually hunt either at night or at dawn or dusk. I have occasionally seen them perched on roadside wires or low-down on fence posts. The one pictured here was roosting in a conifer overlooking a snowy meadow in 2018. 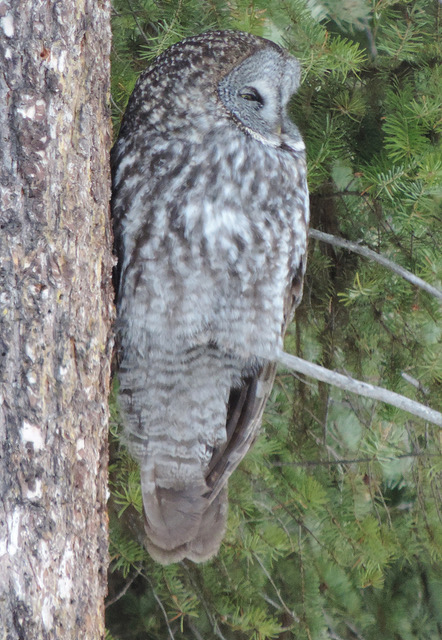 Barred Owls are also large, at 17-19.5”/43-50cm and with a wingspan of 3.5ft/1.1m. All the other owls mentioned here have yellow eyes, but notice that this bird has dark eyes. Very much at home in deep woods especially conifer forests, this adaptable and aggressive owl is mostly nocturnal but sometimes can be heard calling in daytime. The call is very distinctive and sounds like “Who cooks for you? Who cooks for you all?” Perching quietly as most owls do, a Barred Owl will wait to spot prey below then pounce, taking small mammals, birds, amphibians, reptiles and even spiders and other insects. 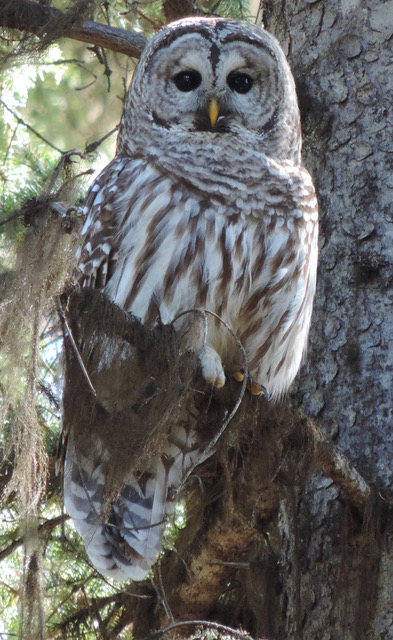 These owls range across northern Canada but surprisingly are also found in much of the eastern US, even in cypress swamps in the deep south. Barred Owls are fairly frequent visitors to the valley floor here in winter and in fact I have already seen one this year (January 2022) in a central Kelowna neighbourhood, a nice surprise! No doubt the unusually cold temperatures followed by all the snow had 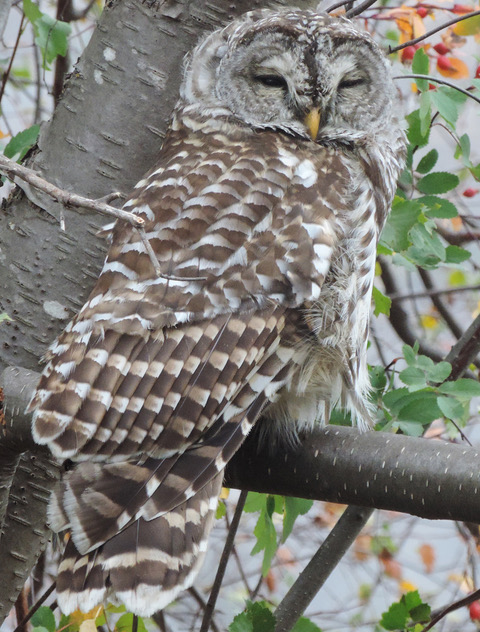 lured it down from the upper woods to try to find prey.

You are much more likely to hear a Northern Saw-whet Owl than see one. In fact, this is my only photograph of one, taken way back in 2007! But I have often heard them and was lucky enough to see one on January 1st not far from my home, possibly here like the Barred Owl due to the snowy winter this year. 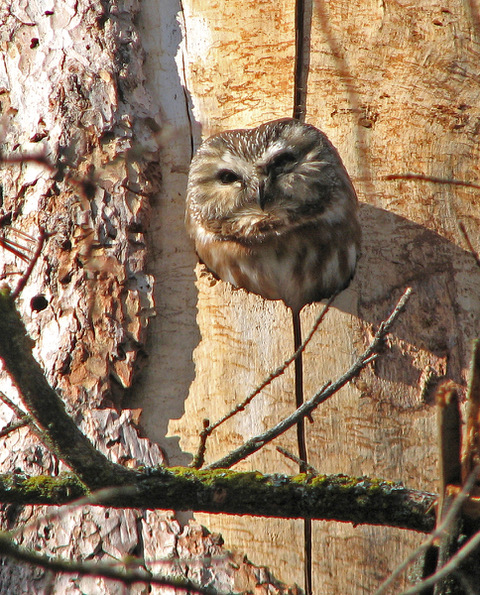 Northern Saw-whet Owls are most attractive little owls, with a whitish patch between the eyes and round the beak giving them an almost ‘baby’ face. In length only 7-8”/18-21cm, and with a wingspan of 16.5”-19”/42-48cm, this owl is very secretive and never easy to find. Listen instead for the call, a series of rapid whistled notes, all on one pitch, which can continue for minutes on end. Known to use the same nest site for a long time if undisturbed, this is a strictly nocturnal hunter, taking mice and voles and occasionally insects and small birds.

Our final owl is the smallest to be found here, the Northern Pygmy-Owl. As the name suggests this bird is only 6.5”-7”/16-18cm in length, with a wingspan of 15”/38cm. In spite of its size, however, this bird is a fierce hunter, and regularly preys on other birds including relatively large ones. Unusually, it is often also active during the day and can be seen when out hunting if you are lucky.    I once heard a Northern 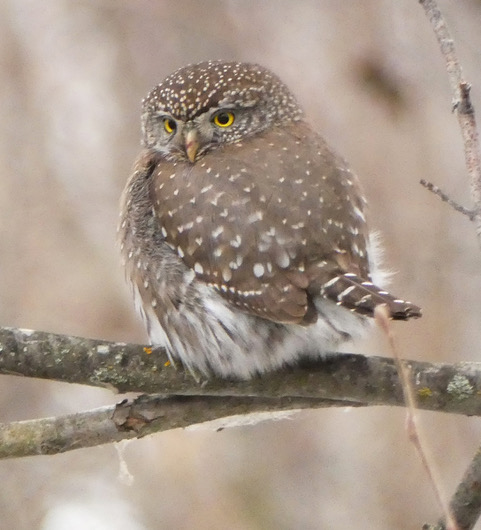 Pygmy-Owl described as “looking like a tennis ball with a tail” when perched on a wire, and perhaps the photo of the one perched here brings that to mind. It was snowing when I took the photo and the bird was intent on something it had heard or seen below it. Look at that stare – watch out below! The other photo shows a bird that had apparently recently fed, as it was content to sit quietly while a group of us took its photo in January 2020 along the Mission Creek Greenway in Kelowna. 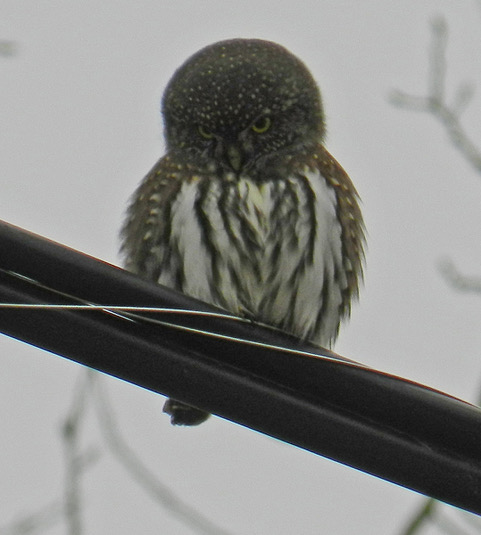 There are other rarer owls that can be sometimes found in our valley, several of which are endangered, but these are the ones, along with Great Horned Owls, that you are probably most likely to encounter. There is always an element of luck involved, but if you don’t go looking and listening, you certainly won’t find them! Enjoy the search.