In past postings we’ve looked at many of the ducks that can be seen in our valley annually. Today let’s look at another family of diving birds, the grebes. Five species of grebe come to the Okanagan annually, plus one more occasionally, but only three are here in winter, and those are the ones we’ll look at today. Spring is the time when these birds change from the non-breeding plumage they have exhibited during the colder months into the more colourful breeding plumage that attracts a mate.

The most abundant grebe on Okanagan Lake and other large lakes in the valley bottom much of the year is the Horned Grebe. A Horned Grebe is about 12–15”/~30-38cm in length and has a wingspan of 18-24”/~46-62cm. The so-called “horns” are the yellowish feathers behind its eyes which the bird can raise and lower at will. The bill is short and dark with a whitish tip and the eye is red. In winter the bird’s sides and the sides of the neck are whitish, giving it a grubby appearance. This changes about now to the breeding plumage already described, with red neck and sides and the pale “horn” feathering. In-between the bird looks, well, in-between! 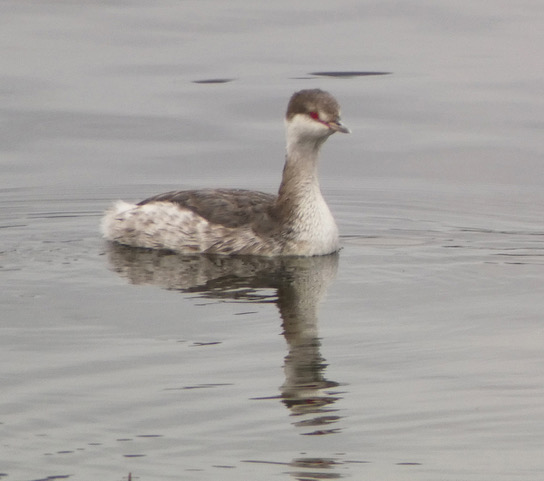 Ranging from the Great Lakes westwards and north to Alaska, Horned Grebes nest on floating platforms of plant matter, hidden in shoreline vegetation in sheltered bays or on smaller bodies of water. They dive for fish and amphibians but also eat leeches, insects and some plants. Like other grebes, they carry their chicks on their backs when they are very young, just as loons do. In winter you will see small groups of them feeding together, sometimes just a few, sometimes many more. 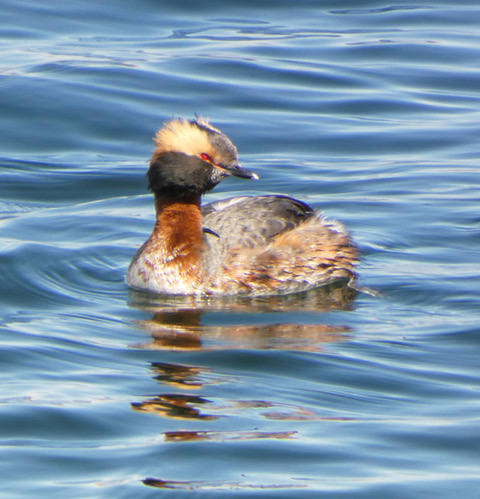 Pied-billed Grebes are also found on Okanagan Lake year-round, often just off-shore where they can feed in the shallower water. Their range in BC is limited to the extreme southwest part of the Province, but on the Prairies and further east they are migrants, retreating to the southern US when freeze-up occurs. Pied-billed Grebes take their name from the breeding field mark of a dark vertical band on their pale bills, which is absent in winter. About the same size as a Horned Grebe, this one is much stockier, with a somewhat tawny brown appearance and with a thicker bill than either the Horned or Red-necked Grebes. The bird’s ‘rear end’ is blunt, not tapered like the other two, an easy way to distinguish them from a distance. They are also much more solitary. I have rarely seen more than one bird at a time. 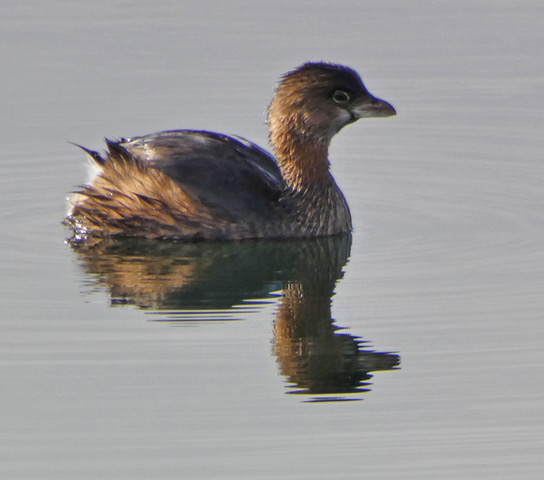 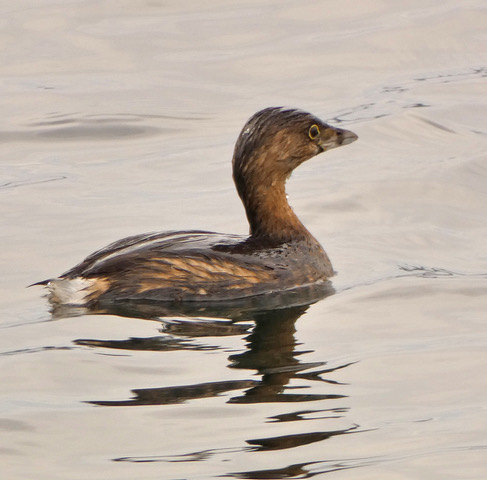 Like Horned Grebes, a floating nest is utilized, attached to emergent vegetation in marshes and quiet water. Their diet is also similar; fish, amphibians, insects, crustaceans and plant matter. They breed on a variety of ponds, marshes, sewage lagoons and coastal bays. They are very powerful swimmers, and can remain submerged for 16–30 seconds when they dive. 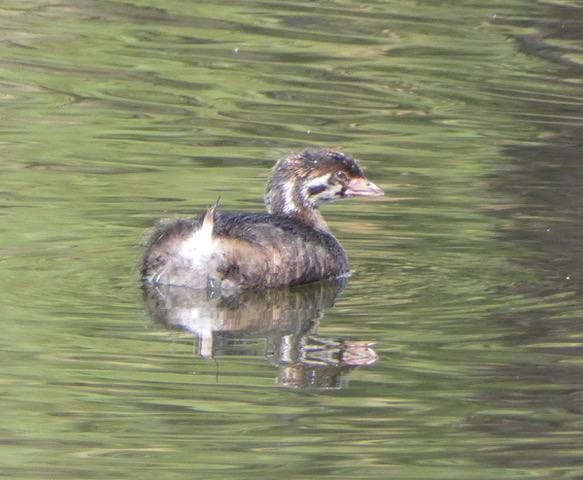 Red-necked Grebes are only red-necked in the breeding season. Like the other two grebes we have already looked at, in winter their plumage is subdued, and many beginning birders can be confused by their appearance. These birds are larger than the other two at ~16.5”/~42-56cm and have a wingspan of 24-35”/~61-88cm. Perhaps the most distinguishing field mark in winter is the bird’s beak, which is long and pointed, fairly heavy, yellow and angled downwards. With a dark flat crown, dark cheeks and a ‘dirty’ grey-white thick neck in winter, the bird changes dramatically into its breeding plumage, sporting a rich russet-red neck, a large white cheek patch and a black crown and forehead. 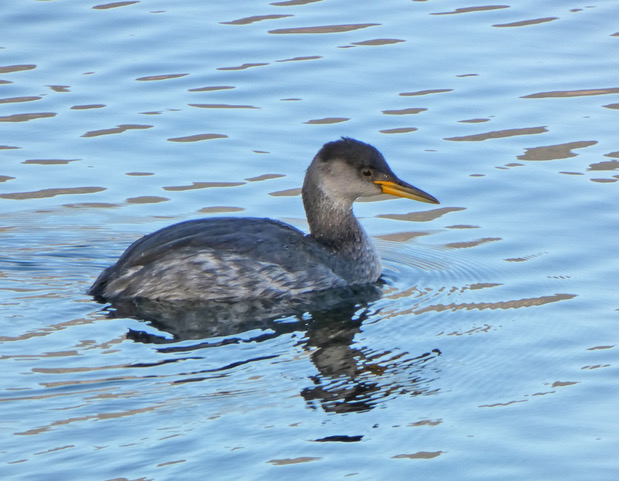 Red-necked Grebes are a largely western species, found wherever suitable interior bodies of water provide good breeding for them. With the onset of winter ice, most of these birds winter at the coasts, but our southwestern lakes provide open water and so they stay. A floating platform is also used as a nest, compact and buoyant, in sheltered waters. And they too eat fish, crustaceans and aquatic insects, and as well worms, mollusks, salamanders and tadpoles. Their courtship and pair bonding displays are quite endearing. Each offers the other some weed, and they mirror the other’s pose as the offer is made and accepted. Their calls, too, are distinctive and easily learned, nasal and almost gull-like, given back and forth as part of pair bonding. 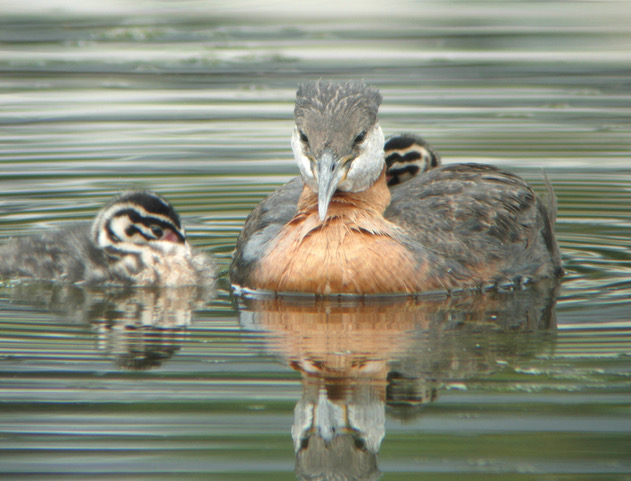 All grebes, like loons, have legs set far back on their bodies. This is a huge help to the birds as they swim, their lobed toes sweeping the water easily. But on land they are clumsy and almost helpless, hence their reliance on floating nests and suitable bodies of water. We are lucky here to see these three year-round. And in our next posting we will look at the two visiting species that migrate here to breed during our summer.