When we live in a valley with a number of lakes, large and small, as well as ponds, rivers
and creeks, (not to mention large landfill sites), we are bound to see gulls. Non-birders
often refer to them as Seagulls. But we have no sea anywhere near us here! Gulls are found
all across Canada’s northern lakes in abundance, and this time we’re going to look at four
of the species commonly found here. Gulls are large birds, easy to see and often in flocks –
and for a beginning birder that makes spotting the obvious differences between them very
simple, when they are in breeding plumage. Let’s take a closer look.

The most abundant gull to be seen in our valley and indeed across North America is the
Ring-billed Gull. As you might expect, there is a distinct black ring around this gull’s yellow
beak. Notice too the yellow eye with a red rim and the yellow legs. This gull has black
primaries, the feathers at the tips of the bird’s long pointed wings. When the bird is
standing, these feathers fold over the bird’s back and might appear to be tail feathers, but
they’re not. The tail is white. 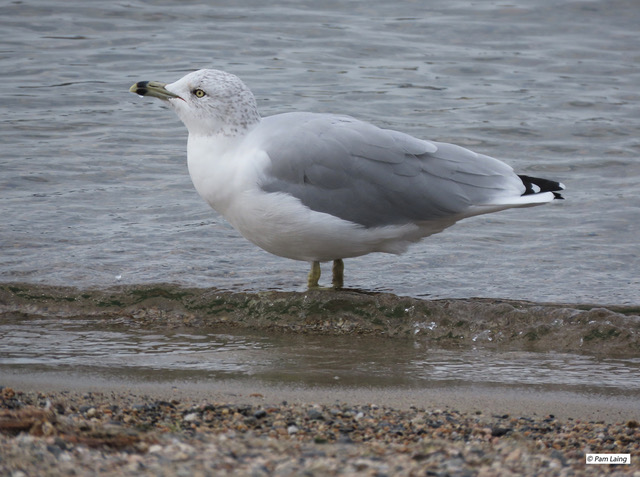 Ring-billed Gulls are 17.5 to 21”/~43-54 cm in size, medium for a gull. Ranging across the
entire continent they breed in freshwater in the interior and only retreat in winter from the
harshest northern and western environments. Some spend time at the coast, though most
remain here all year. It’s easy to see them along the shores of any of our lakes, or at the
landfill sites, where they whirl in large flocks and pick edible matter out of the garbage. 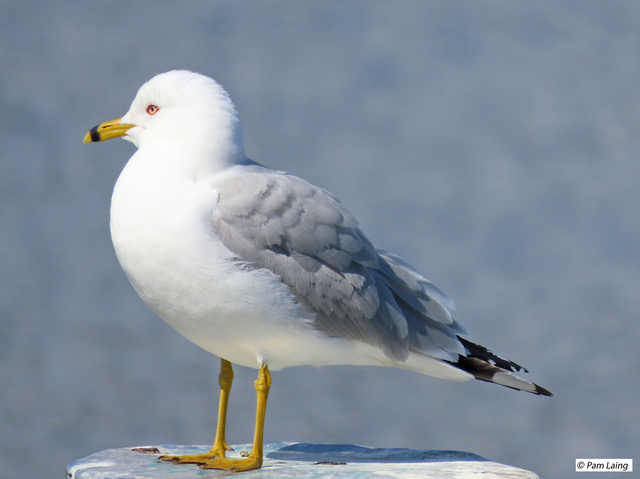 Herring Gulls are much larger gulls, at 22-26”/~56-66cm. This bird too has black primaries
and a yellow eye. The yellow beak is much larger than that of the Ring-billed and has a
prominent red spot on the lower mandible. And when you look at the bird’s legs they are
pink! Herring Gulls range throughout North America too along the coasts as well as inland
lakes and rivers and also reservoirs and landfills. They do not range far out to sea. Being
large and aggressive gulls, they frequently steal food from other birds. 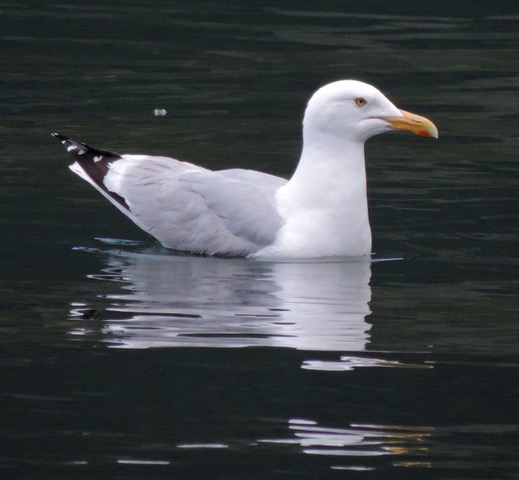 California Gulls are smaller than Herring Gulls, closer to the size of the Ring-billed. Like the
other two species we’ve looked at, these birds too have black primary feathers on their
wing tips. The beak again is yellow, but instead of just a red spot on the lower half, this
species features a red spot AND a black mark above it. The bird’s eye is noticeably dark, not
yellow, and the bird’s back, the mantle, is a darker grey. The legs are greenish-yellow, not
pink. California Gulls have a much smaller range than the two above, breeding at scattered
locations across the interior and only in the west of the continent. In our valley they are
more commonly seen in the summer months. 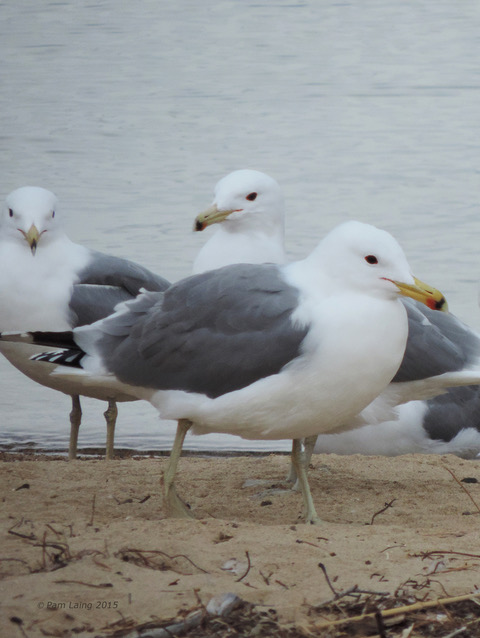 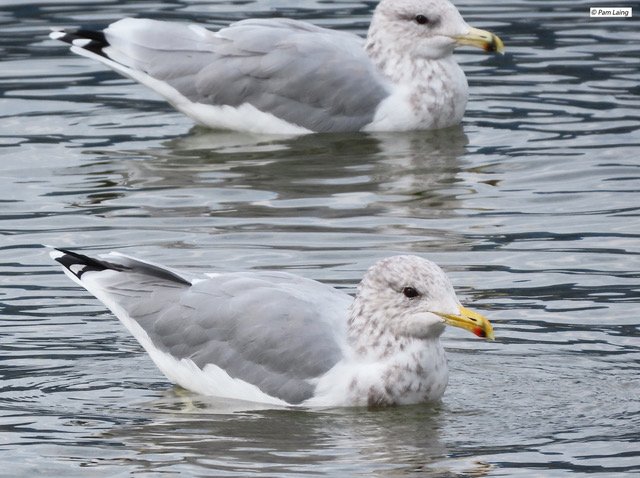 And our final species today is the Glaucous-winged Gull. Uniquely of this foursome,
Glaucous-winged Gulls do NOT have black tips to their wings, but grey. With a prominent
yellow beak sporting a red dot, pink legs and dark eyes this species is easy to pick out of a
crowd. They are often seen on the light standards on the Bennett Bridge in Kelowna. Their
range is much more coastal than the other three, and only western. This is the most
common large gull of the Pacific Northwest coast year round but we see them here more
often in winter than in summer. 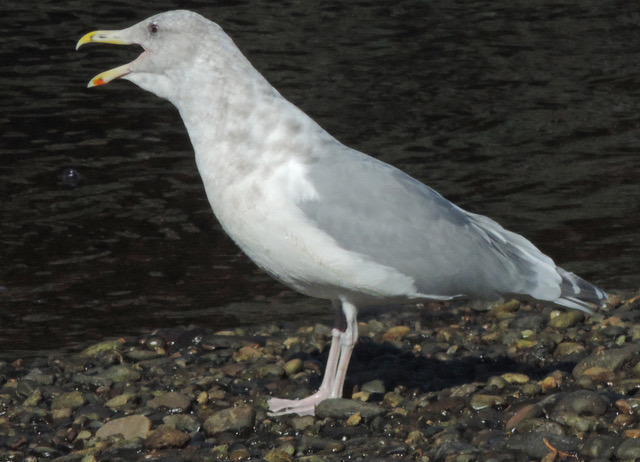 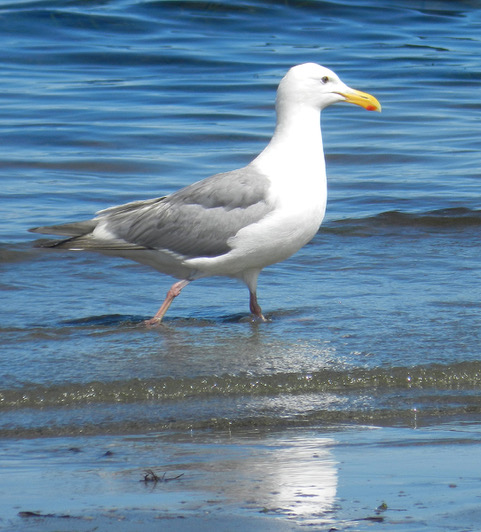 Gulls feed on fish, aquatic mollusks, crustaceans and garbage; the smaller gulls also take
insects and some grains. Many of them scavenge from each other and from sites of human
habitation. I am sure I don’t need to tell you what gulls sound like when they are competing
for food! The voices do vary and some experts can tell them apart, but to you and me the
noise sometimes is just that – noise.

As I indicated earlier, the features I’ve described above are all for birds in breeding
plumages. Gulls moult into a confusing range of plumage morphs as they mature. Right now
in fall, for example, many birds have a sprinkling of darker feathers on their heads. If you
see an all-dark gull, it’s an immature one, and some of them are difficult to tell apart. For
now, just concentrate on the field marks we’ve noted and you’ll be well on your way to
distinguishing these four species from each other. A useful tip is that if there is a bird that’s
a different species from the rest of the assembled flock it will often be on the edge of the
group or behaving slightly differently. Keep looking and you’ll spot the differences. Just
don’t call them seagulls!