In our spring posting we took a close look at the three species of Grebe that spend their entire year here, changing plumage into breeding ‘duds’ each spring. Today we’ll focus on the two species that migrate here to breed during our summer. These are the Western Grebe and the Eared Grebe.

Western Grebes are our largest grebes, at ~25”/~60-70cm and you will rarely see them flying. Instead watch for large lines of them in migration northbound on Okanagan Lake on their way to breeding grounds. A very large colony of them breeds annually on Shuswap Lake but sometimes we see as many as three hundred birds as they pass through the Central Okanagan each spring and early summer. Occasionally a few stay here to breed if they can find suitable habitat. Like the other grebes they use floating nests attached to thick vegetation of submerged plants and surrounded by freshwater lakes with occasional marshes. 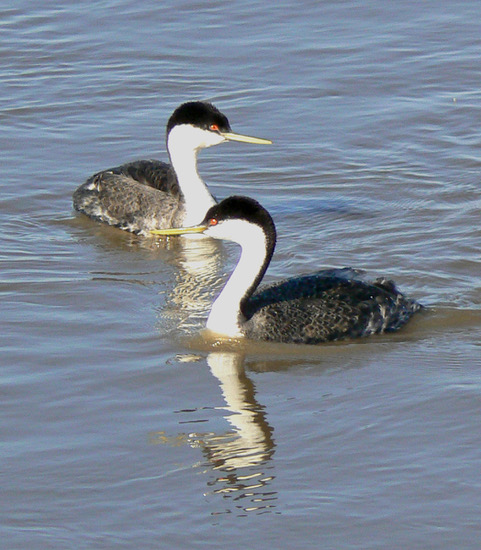 They are clean-cut, attractive birds with a dark grey back and broad stripe down the nape of their long necks. The crown of the bird is also black and extends below the eye, which is red. Their bills are greenish-yellow, long, slender and slightly upturned. The throat, breast and belly of the birds are white, making for a clean-cut appearance. Strictly a western North American species, their range is from southern Canada south to Mexico. They feed on a variety of freshwater fish, as well crustaceans, worms and the occasional insect. 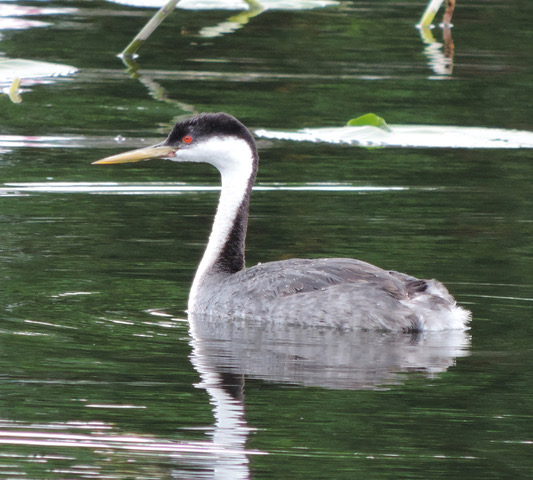 Western Grebes are perhaps best known to the general public for their spectacular breeding display ‘dances’. You may have seen footage of the birds on TV or YouTube, showing them in pairs rising up on the water, bending their necks and running swiftly across the surface until gravity pulls them down. If you are lucky enough to be in Salmon Arm when they are performing these pair bonding manoeuvres, you will never forget it. It is truly amazing to watch.

Eared Grebes are also amazing but in a totally different way, which we’ll see shortly. Much smaller than Western Grebes, Eared are only ~13”/~33cm. They usually arrive in our valley sometime in May and breed on smaller bodies of fresh water than Westerns. Their floating nests are anchored in thinly spaced reeds or submerged vegetation in shallow water in ponds, marshes and small lakes. A breeding colony has been active for many years at Rawlings Lake north east of Lumby but several have nested on Robert Lake in north Glenmore, Kelowna, for the past few years when water levels have been suitable. They too feed on underwater crustaceans, aquatic insects, fish and mollusks. 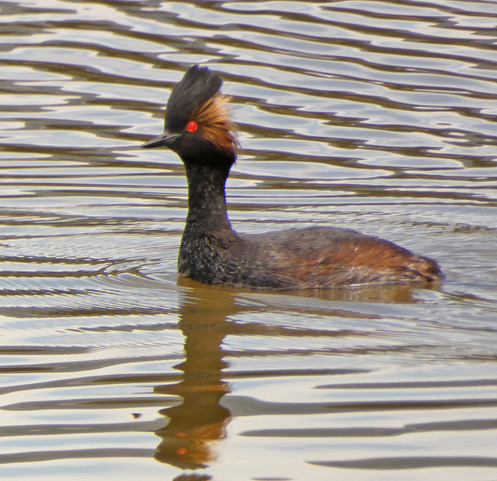 In breeding season, which is when we see them here, they have black necks and backs, and a black head while behind their red eyes are wispy yellow plumes of feathers which give them their name. They have a thin pointed dark beak, almost needle-like by comparison with all the other grebes. Their range is also western and inland during breeding, from southern Canada through the Prairie provinces and south to Mexico. When non-breeding they can often be found in coastal bays of the Pacific coast. 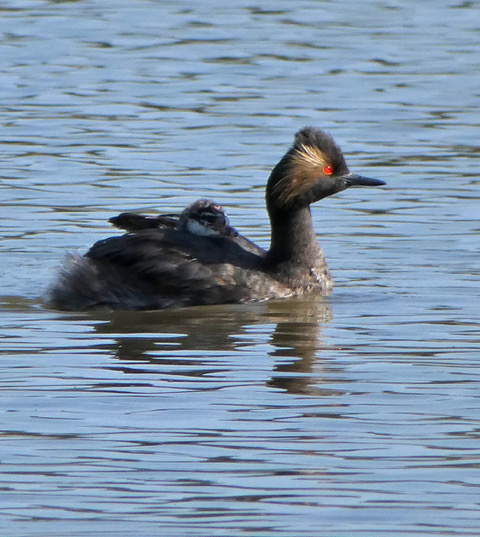 So how are they amazing? I had not known this but when I started to read up about the species for this posting I discovered that after breeding their physiology undergoes a unique and very complex series of changes. Body-fat stores and changes in muscle, heart and digestive organs prepare the bird for fall migration. The bird’s energy reserves and body mass are bulked up but it is flightless during the process. In fact they may have the longest periods of flightlessness of any bird, up to 10 months in all! 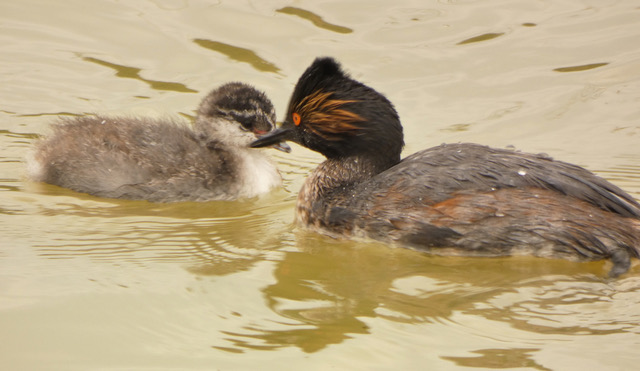 All grebes, like loons, have legs set far back on their bodies, as we’ve already seen. This is a huge help to the birds as they swim, their lobed toes sweeping the water easily. But on land they are clumsy and almost helpless, so they rely on the floating nests and suitable bodies of water on which to breed. Next time you see either a Western or an Eared Grebe think for a moment of their amazing adaptations to ensure their survival. And aren’t we lucky to have them here for even a short time each year?