Kokanee, a form of landlocked salmon, are Indigenous to the Okanagan and at one time were abundant within Okanagan and Wood Lake. Kokanee adapted from sockeye salmon, who migrated from the Columbia River approximately 10,000 years ago after the last ice age. Once damming became prominent in the area, sockeye populations disappeared and what remained was Kokanee by adapting to the lake systems in the Okanagan. Due this specific adaptation, kokanee populations in other areas of BC, such as the Kootenays, are closer relatives to sockeye salmon than they are to Okanagan kokanee. The Okanagan kokanee are unique in the sense that there are both stream spawners and shore spawners. The stream spawner, much like salmon, move upstream to spawn, whereas shore spawners, like the name implies, spawn on the shores of Okanagan, Kalamalka, and Wood lake. Locals, who grew up in the area will tell stories of their prominence within Okanagan and Wood lake and even go as far as to describe the water looking red due to its abundance of kokanee. Although kokanee in BC are a yellow-listed species, meaning they are not considered at risk, the Okanagan populations have been steadily declining. Several things are responsible for their decline, including the introduction of opossum shrimp, the overuse of fertilizers, and higher water temperatures. The opossum shrimp were intentionally introduced into Okanagan lake in 1966 as an attempt to increase kokanee size; however, the shrimp are able to avoid predation and rather added strain to the Kokanee because they compete for the same zoo plankton that kokanee feed on. Additionally, fertilizers used within the area, make their way into the lakes adding more nutrients to the bottom, and therefore causing algae blooms to become more common. Along with higher water temperatures causing lower oxygen levels in the lake, when the blooms die and decay to the lake bottom, it also uses much of the lake’s oxygen, killing off fish. Actions have been taken to help restore populations, however, there is still a long way to go if we are to return to a time when the lakes and streams were overrun with kokanee. 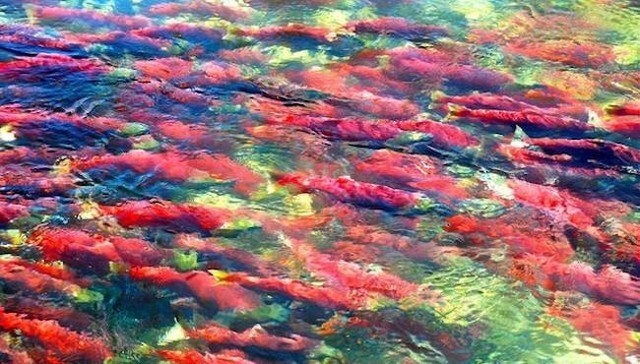