The life cycle of kokanee is a part of the Okanagan that is visible each year in the fall. When walking down a creek or stream from mid September to mid October, it is hard to miss the bright red fish migrating up. Okanagan Kokanee are unique because one may also see spawning kokanee from mid October to mid November in lakes such as Kalamalka, Wood, and Okanagan. This is because the Okanagan kokanee have two distinct kokanee species based on their spawning locations: stream spawners and shore spawners. Stream spawners are generally larger and spawn later in life but earlier in the year, while shore spawners are typically smaller and spawn earlier in life but later in the year. Kokanee use Brandt, Bellevue, Mill, and Mission Creek’s to spawn. At approximately 3-4 years of age kokanee begin to spawn and, in the process, turn a bright red colour. Females release eggs at their spawning location for the males to fertilize and the female kokanee covers the eggs with gravel by using her tail. Once the eggs are released, fertilized, and covered in gravel, the adults die. The eggs remain in the stream until they hatch in January-February at which time they are “Alevins”. After they hatch, they turn into “fry” and go downstream with the current. The adults remain in the larger bodies of water fed by the stream, until they make their journey back to the stream to spawn and continue the cycle. 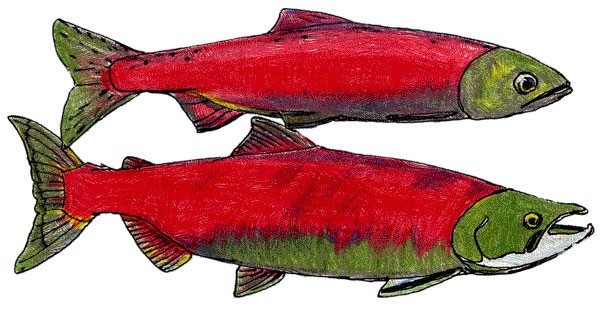