Skip to main content
Eyles was born in Bristol, England, in 1925 and joined the Home Guard, the 8th Battalion Somerset Light Infantry at age 17. In 1943 he joined the Royal Navy where he trained as a radar operator. He served on the ships Wessex, Highflyer, Drake, Valkyrie, Golden Hind, Penguin and Venerable. He was promoted from ordinary seaman to able seaman and served mostly in the South Pacific. At the end of the Second World War he stayed in Sydney, Australia, for more radar training before returning to Portsmouth in England.
He was discharged from the navy in 1947 and immigrated to Canada where he worked as a federal fruit and vegetable inspector in the Okanagan from 1959 to 1987.
Eyles joined Oyama Branch of the Legion in British Columbia and served as president and later as North Okanagan Zone commander. He was president of what was then called Pacific Command for 1987-89. He served on Dominion Executive Council from 1983 to 1990 and served on several committees, including Veterans Service, Leadership and Development, Constitution and Laws and was a founding member of the Youth Committee. He was a life member of Oyama Branch and received the Meritorious Service Medal and the Palm Leaf.
He was also active in the Imperial Veterans Section which served Commonwealth veterans living in Canada. He became president of the section in 1984 and in 1990. In that capacity, he represented The Royal Canadian Legion in the Remembrance Day ceremonies in London, England, in 1989.
Always interested in veterans issues, Eyles became a founding member of the Kelowna Naval Veterans Association and he was awarded life membership in the British Columbia Burma Star Association in 1990.
Eyles continued to live in Oyama until September 2007 when he and his wife Peggy moved to Kelowna. Derek Eyles died on December 21st, 2008 in Kelowna, BC. He was 83. He is survived by Peggy, daughters Jennifer, Diane, Pauline, and Barbara and four grandsons.
Submitted by loved ones. 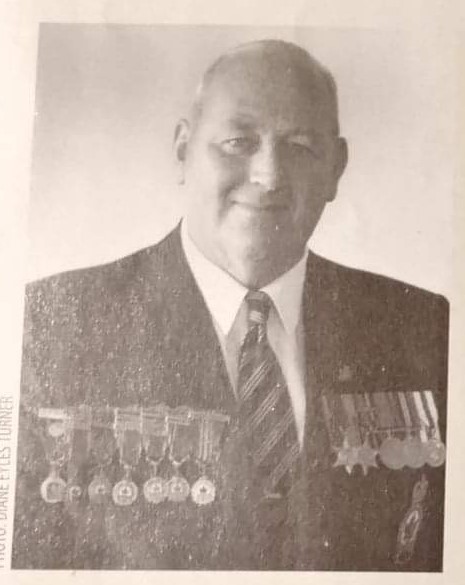