The locomotive feels like a living thing as it rolls from side to side over the weed-covered rail bed. “That’s just the harmonic roll,” says engineer Dean Taylor who is at the throttle of engine 3550. “It’s a natural thing on most trains, depending on the condition of the track. We will keep our speed down so it won’t get too extreme.” We are southbound with chemical tank cars bound from Vernon to Winfield on one of the two Okanagan railways. This is the Okanagan Valley Railway (OVR) – the other line is the Kelowna Pacific Railway (KPR) – but they have shared the tracks for much of their time in the Okanagan. Our speed builds as we leave Coldstream behind and keep the waters of Kalamalka Lake close on our left. The speedometer shows 20 m/h (32 km/h) as a boat pulling a water-skier slips past us also heading south. This is the fastest we will go! “The rail bed can’t support higher speeds without some major maintenance,” says Ulf Kailuweit who is the conductor on this trip. “If we go faster, we will break things, so we save money by going slowly.” A twenty-minute trip by highway will take us almost two hours by rail, but it is a unique way of touching Canada’s past.

The railway first came to Kelowna from Kamloops in 1925 following six years of construction by the Canadian National Railway. Prior to this, the CPR operated a link (Shuswap and Okanagan Railway) from the mainline at Sicamous to Okanagan Landing, near Vernon, where passengers and freight continued south by steamboat. This line opened in 1892 but after the rail was built south to Kelowna, the CPR closed its boat service from Okanagan Landing and moved it to Kelowna where it operated a barge service until 1972. So the line we are riding today is leased by the ‘short line’ KPR that, in turn, allows access to the OVR in much the same way as the earlier joint service agreements did between the CNR and CPR. The OVR gives the KPR access to its rails north of Vernon to Armstrong where the KPR then branches west to Campbell Creek to join the mainline to Kamloops.

Both the OVR and the KPR are considered short lines – small branch lines that have been spun off by the large railways that want to concentrate on the more profitable mainline traffic. The CPR was first to do this. It leased the track in 1997 to a private company based in Denver, Colorado. This company, OmniTRAX, operates 18 short lines in North America. The affiliation with other short lines gives the OVR the advantage of borrowing equipment from them. That explains why locomotive 3550 wears a Hudson’s Bay Railway logo and the second unit on this train, locomotive 2505, wears the livery of Central Kansas Railway. The KPR is operated by a public company, KnightHawk Rail Ltd. Its 109 miles of track were spun off from CNR with additional running rights to 26 miles of OVR’s track. The two short lines maintain competition in the Okanagan in the same way the original CNR and CPR companies did so customers continue to have a choice. 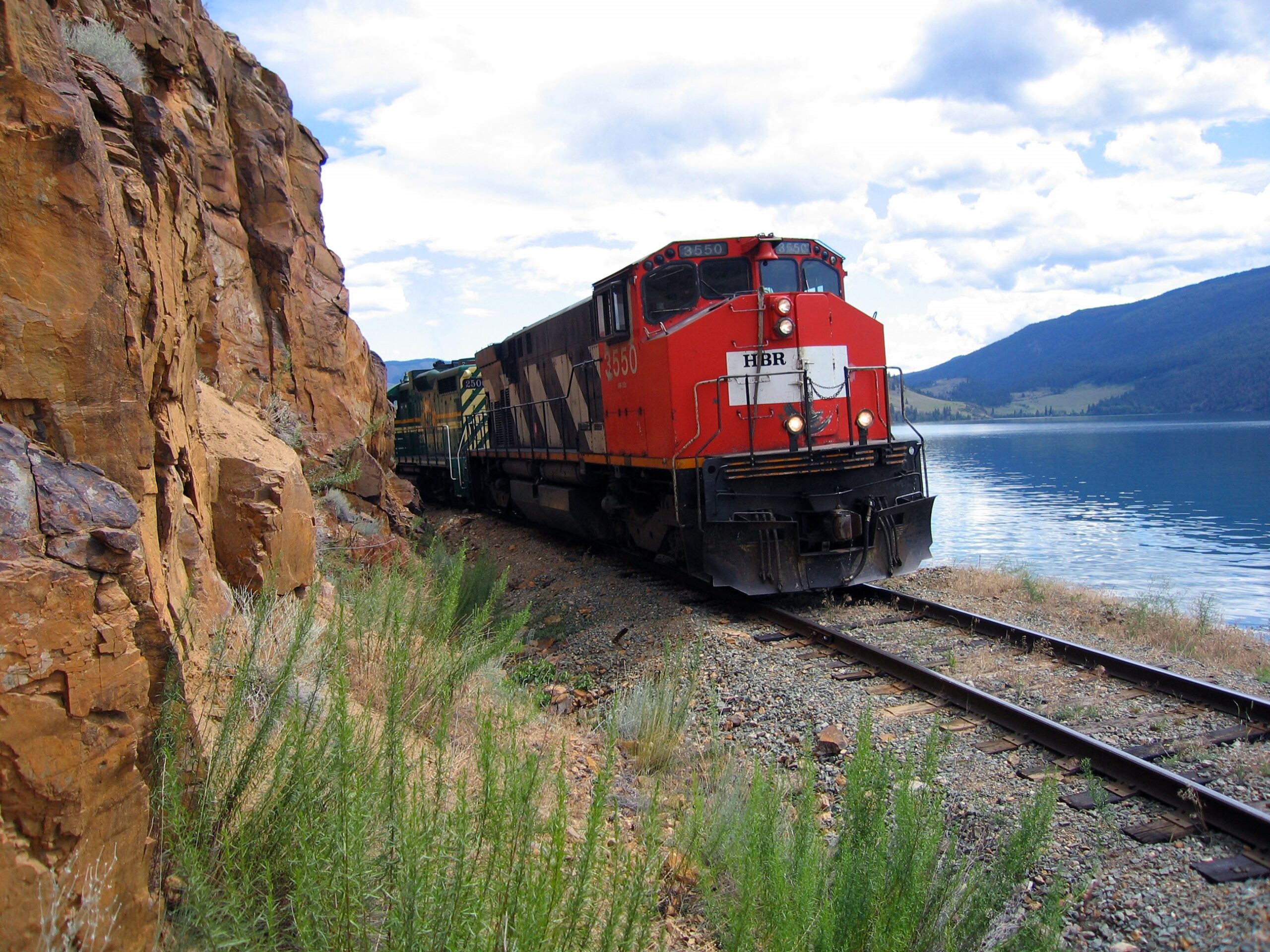 Dennis Sawchuk loves railroading. He is the general manager of the OVR, based in a small office in Vernon. You won’t find him in a suit though. The company has only nine full-time employees, so he may often be at the throttle of one of the locomotives or helping the track crew spike down new rails. “I just celebrated forty years with railroading,” he says. “I started with BC Rail just out of high school – a friend and I went to their office looking for work. The guy there asked if I would go up north and I said, ‘sure’. So he said – ‘ok, you’ll be a trainman – your training course starts next week.’ I didn’t know what a trainman was, but I was happy to have a job. I’ve been fascinated by railways ever since.”

Would the OVR consider running a passenger service? Dennis is emphatic, “No. We couldn’t do that without a subsidy. Our focus is freight and we want to serve our customers as best we can. A passenger train would not be economically possible here given the costs associated with passenger service.” The demise of the Wine Train that operated for several years between Kelowna and Armstrong is testimony to this fact.

Maintaining the tracks is a costly burden for the short-line railways. “We have spent over two million dollars upgrading the 46.3 miles of track that CP leased to us,” says Dennis. “It was not in very good shape when we took it over. During our first months of operation we had several trains ‘on the ground’ or derailed due to problems with the rail bed. Things are much better now, but the trains must still use a greatly reduced speed.” That is certainly clear as we crawl along Kalamalka Lake at 10 mph. The lake is only two meters off to our left and a steep rock bluff is the same distance to our right. Ulf points out the need for vigilance here. “We often get rocks falling on the track here, especially in the winter. We need to take it very slow.” Unlike the Bullet Trains of Japan or the TGV in France, we don’t have a tight schedule, so speed is of little concern. We stop from time to time to take a few photos of the train in this magnificent setting. Ulf and Dean wave to the sunbathers on a rocky outcrop and a woman walking her dog along the track steps aside and waves to us as we rumble by. People along the railway seem to view the train as a friend, but drivers in the cities of Vernon and Kelowna don’t always share this attitude.

“We can’t hold up traffic for more than five minutes at a crossing”, explains Dennis. If we are switching at a crossing, we have to move the train every five minutes to allow cars to pass. Some drivers become pretty impatient and make it known they aren’t happy with us. We try our best to not block a crossing for long, but it’s sometimes difficult.” Dennis adds that some drivers take chances by crossing in front of the train even when the signals are going and the train whistle is sounding. ” We hit an average of three every year,” he says. “One even tried to avoid responsibility by claiming we were not running on our schedule. 1 pointed out that we don’t have a schedule. Sometimes they just look really surprised and say they didn’t think there were any trains here. You would think the tracks would be a good clue.”

Can short-line railways make a living in this modern day? Dennis is very optimistic. “Right now, we carry all the raw material to the Lavington glass plant. That’s a huge source of revenue for us. All the sand, soda ash and whatever else they need comes by rail. We are essential for that plant. We also pick up forest products from the Lumby area and bring chemicals to the plant in Winfield along with freight to Kelowna. What the public should understand”, he adds, “is that the 1400 full carloads of material that-at w: bring to the glass plant would otherwise have to be hauled by truck-that could mean some 3000 truckloads just to the glass plant.” Some drivers complain about being held up for a few minutes at a crossing, but the additional truck traffic on the Okanagan highways to haul what is now done with the two railways would cause much greater frustration. Consider also the extra wear on the highways that taxpayers must pay for. The railways get no tax money for their maintenance. “The highways would be clogged if the railways were not operating here. If Tolko bad to tuck their entire product from Kelowna, I can’t imagine the traffic on that highway – along with the damage to the road surface,” Dennis says.

An American study on the relative costs of transportation efficiency also supports the use of railways. Based on the number of miles one ton of freight can be carried per gallon of fuel, it found that a truck rated 59 miles while a railway rated 202 miles. This is a considerably better efficiency rating and is relevant in light of the Kyoto Accord to reduce emissions. An EPA emission control study showed that hydrocarbon emissions to move a ton of cargo 1000 miles were about one-third less by rail than by truck and carbon monoxide emissions were less than half of those produced by truck. Of course, truck transport is necessary and won’t be replaced by the railway, but the railway is becoming more viable than it has been in the past decades. “So far the government bas not done much to help the short lines,” says Dennis. “They have said that we are important and promise to help us, but l haven’t seen anything yet, so we are still struggling along on our own. But,” he adds, “we expect our loads to increase. The former distillery in Winfield will be producing ethanol for fuel and we will be the prime transport for this up to the main line in Sicamous. This could have a huge effect on our revenues.”

We have dropped our carloads of chemicals to the Ashland plant in Winfield then shunted around to pick up some empty tank cars from Okanagan Biofuels and are now poised facing north about five miles behind a KPR train that is laden with building supplies and scrap metal from Kelowna. Ulf calls for clearance on the radiotelephone and is patched to a central rail dispatch in Montreal. Because two trains are using the same track, all movements are closely controlled. Our clearance comes back and we can proceed as long as we keep contact with the train ahead. Ulf calls the KPR train and they relay the mileage marker they have just passed -he then tells Dean, “We’re cleared to mile 98”. Dean repeats the clearance and opens the throttle. Soon our speed is at the LO mph mark where it will stay. Kids, people at their summer cabins, boaters on the lake and hikers on the rail bed all wave as we pass by -one of the two OKV trains that will bring products into and out of the valley today. Over the year this little railway alone will move 3800 full carloads. The train’s horn blows for a crossing and echoes across the lakes and bounces off the hills. It’s a sound from the past that will stay with us into this new century.