Last summer I introduced you to our largest flycatchers, the kingbirds, Eastern Kingbird and Western Kingbird. This year let’s look at other flycatchers that also come here in summer to breed and raise their young on abundant insect food during the warmer months. Some of these are usually found at higher elevations and also usually at the top of trees. I have several long-distance photos of them. But without expensive camera equipment, which I don’t have, these images are too small to show the differences between them clearly.

(The species I am referring to include Dusky, Hammond’s, Pacific Slope and Olive-sided Flycatcher. Also in this category is the Least Flycatcher, which often inhabits the lower valley, but is elusive. There are distinguishing field marks which some birders are able to use to see the differences, but on the whole it is safer to identify these species when they are vocalizing, as their songs and calls are more distinctive.)

Instead, I propose to focus on the easily seen three species which favour different lower elevation habitats. These are Say’s Phoebe, Western Wood Pewee and Willow Flycatcher.

Say’s Phoebes are attractive, compact birds. They have a pale rufous belly, pale grey back and upper breast, and black tails. About 7”/~17.5 cm in length and with a wingspan of 13”/~33 cm, they are medium-sized. Since they prefer open country but are not particularly shy around people, they are often found on ranches or farms near livestock. The contrasting dark cap on the smallish domed head is easy to spot as the bird sits on a fence post, mullein or power line, often wagging its tail. 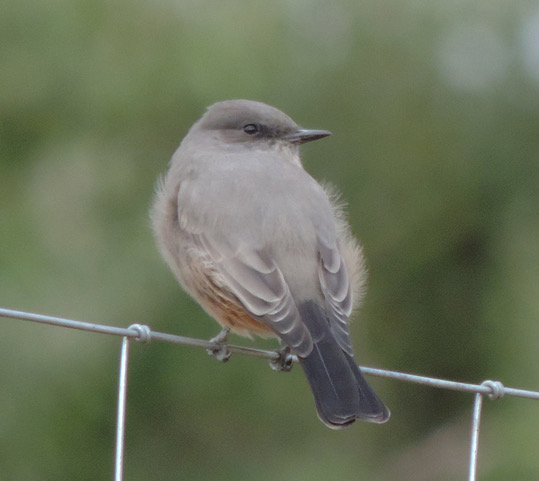 Say’s Phoebe near a farm

Say’s Phoebes are the first flycatcher to arrive here in spring migration and stay after others have left after breeding. They raise one or two broods between April and July, the nest a shallow cup of twigs, moss or stems on a ledge or in a rocky crevice. Their song is relatively low, but their common call is a plaintive clear whistle sounding like “Pee-er”, downward slurring.

In the valley bottom woods the flycatcher you are most likely to hear is the Western Wood Pewee and this is easy to recognize too, a repeated “Dree-er”. This is one of the few birdsongs to be continued late into the heat of summer, when most other species have ceased vocalizing. This is a dark flycatcher, dark grey overall with two indistinct wingbars and a paler belly. This bird is a little smaller than the Say’s Phoebe at 6 ¼”/~ 16 cm and has a shorter wingspan of 10 ½”/ ~27 cm. 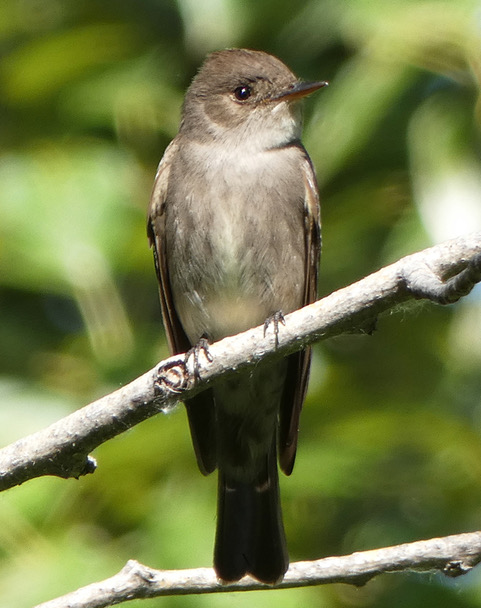 Western Wood Pewee at the edge of mixed woodland

You will often hear the call, then see this bird hawking for insects from a high perch on a tree branch. The flight is a flurry of rapid wing beats and the bird’s domed head is more prominent when it is alertly looking for flying prey. Raising one brood a year between May and August, they nest in the fork of a horizontal tree branch in a shallow cup of woven grasses.

Our third species is always found in brushy habitat near water, often in the willows after which it is named, the Willow Flycatcher. Browner than either of our two previous species, this bird has a broad straight dark brown tail, and a paler belly than back. This is also the smallest of the three at 5–6”/~ 13-17 cm and with a wingspan of 7 ½-9”/~19-24 cm. You will often hear their distinctive “Fitz-BEW” before you catch a glimpse of their darting forays for prey. Like the Western Wood Pewee, these birds raise one brood annually between May and August, nesting in a rather loose and untidy cup in the base of a shrub near the water. Willow Flycatchers are strongly territorial, spreading their tails and flicking them upwards during aggressive encounters. 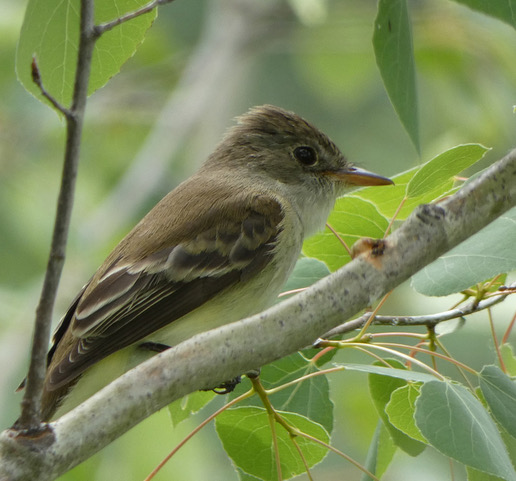 Willow Flycatcher in trees near a pond 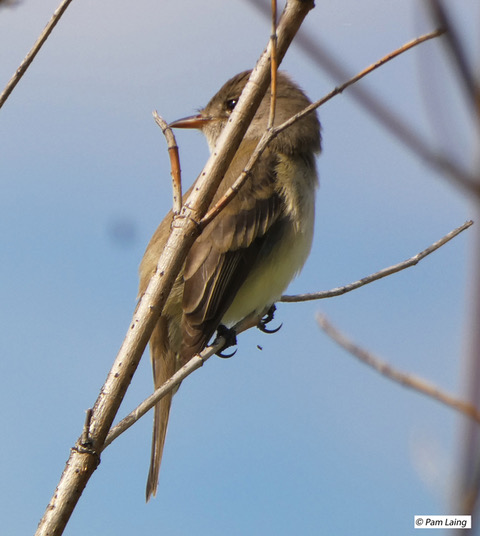 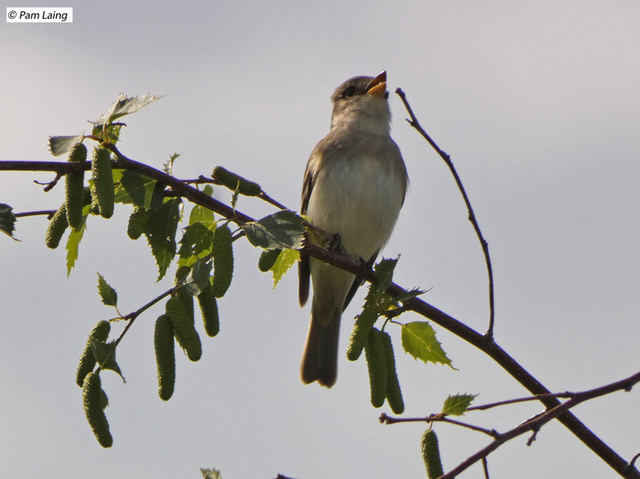 All these three species perch and wait for passing insect prey, then dart out to take them; bees, wasps, flies, mosquitoes, moths. In winter they all eat berries as well. Look for the domed head and flat beak common to all flycatchers, listen for their distinctive songs or calls and take into account the habitat around you. It should be easy to identify all three.

Summer may bring insects to annoy humans, but we can be thankful we have help from species such as these to reduce their numbers and enliven our summer birding outings.