Eliza Jane Swalwell’s bungalow was located near the entrance to Swalwell Park, toward Middle Vernon Creek. The Swalwell barn also faced Bottom Wood Lake Road a little further east. Jane’s nephew, Pete Simpson, who is now ninety-two years of age, remembers visiting his Aunt Jane during the mid-thirties and his father telling him that this was “the nicest house in Winfield” in its day. Pete also recalls that his cousin, Tommy Jones (Jane Swalwell’s son by her first marriage), lived in a cabin across Bottom Wood Lake Road from Swalwell Park, on land that Tommy had sold to Wilton R. Powley with the condition that he could remain there as long as he lived. Jane was a near neighbour of Mrs. Powley (nee Grace Adams of Oyama) who undoubtedly relied on Jane for local historical information when she compiled the History of Winfield, for facts such as the Okanagan name for Wood Lake being Pelmewash. 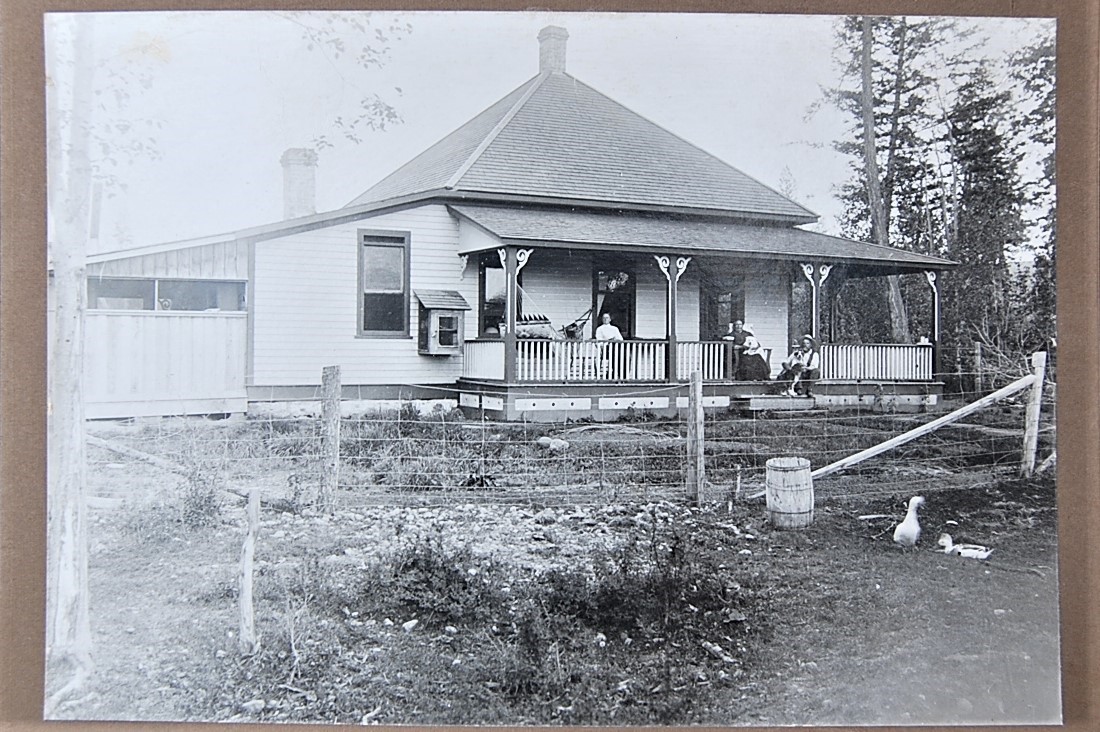 What do we know about Jane Simpson? She provided us with some biographical information in an article in the Annual Report of the Okanagan Historical Society. She was the daughter of George W. Simpson, an early settler in the Ellison area, and his Okanagan wife, Sarah. Eliza Jane was born on 14 December 1868 on the Houghton Ranch (later the Coldstream Ranch) that her father managed. She moved with her parents to a ranch at the south end of Duck Lake that her father had purchased from Frederick Brent in 1870 and moved again when he sold it to the Postill brothers in 1872. (This ranch is now known as the El Dorado Ranch, owned by the Bennett family.) Her father then purchased a ranch on the Old Vernon Road, east of what is now Reid’s Corner. Jane had three brothers, George, Tom and Charlie and a sister Sarah. The Simpson children undoubtedly attended the Okanagan School that was started in 1875 on property purchased from the Smithson family, near the site of the former School District #23 building.  The Simpson children were fluent in English and Nsyilx’cen. Jane married a neighbouring landowner, Tom Jones, in 1884 and they had one son, Tommy Jones, before she was widowed in 1888. The couple’s land (Lot 120) was located where the Kelowna Airport stands today, fronting the Old Vernon Road. Four years later, in 1892, Jane married an Englishman named William Pelissier Swalwell, a cousin of the Postills, and they apparently built a home and lived on her land until 1909 when they sold to Dr. C. W. Dickson. Henceforth that property became known locally as the Dickson Ranch. Her father, George W. Simpson, eventually sold his ranch to Price Ellison and then he and Sarah lived with their daughter until her death in 1901 and his in 1902.

It is likely that the Swalwells moved to Winfield (Lake Country) after the 1909 sale of their Ellison ranch.  This was the year that the Maddock brothers’ subdivision was completed and the various members of the Simpson family apparently purchased lots in that development. It appears that the Swalwells had previously sold a half section of land to Homer and Vincent Maddock. We know from the 1911 Canada Census that the couple and her son, Thomas Swalwell (Jones), along with her brother, George William Jr., were living in one house in Winfield, likely the one shown above. They resided next to her widower brother, Thomas Simpson, his two children Harvey and Annie and her younger brother, Charles. They were also residing close to her sister, Sarah, who had married Victor Boriot (also spelled “Borrie”) and was living on the Duck Lake Reserve. Ten years later, Jane Swalwell is listed in the 1921 Canada Census as the married head of the household, living with her son, Tommy Jones, and her brother, Charles. Their neighbours were her brother, George, and his wife, Margaret. William Swalwell was not living with Jane and Tommy in 1921 and I have not been able to find him in the area. He died in Kamloops in 1926. Jane Eliza Swalwell lived in this house in Winfield for decades and she died in Kelowna on February 13, 1944 at the age of 75 years.