Richard and Arthur Chatterton were part of an aspiring, middle class, English family. Their parents, George Joseph and Jane Edwards Chatterton and family appear in the 1891 UK census in Alvaston, Derbyshire, Herts, England. Their father was a metal tube manufacturer although he had earlier been identified as a “coal merchant.” The children were, in birth order, Edgar (age 20 in medical school), Frederick (19 in architectural school), Harold (18), Richard (16, b. 29 December 1874), Arthur (15, b. March 22, 1876) and Mary (13, baptised 10 April 1878), all in school. In the 1901 UK census only Mary was living at home while Arthur and Richard were living together nearby, both working as engineers.

Richard Chatterton married Agnes Mary Marsden in 1903 in Holloway, England, the same year that the couple moved to Okanagan Landing, BC. Richard was most likely employed as an engineer or draftsman in the construction of the SS Okanagan that launched in 1907. He pre-empted and/or purchased land in Lake Country soon after his arrival. He and Agnes had one child while living at Okanagan Landing, a girl named Gywnith Mary (b. 1906).

Arthur Chatterton arrived in the Okanagan in 1905 and took up residence on the land that Richard had purchased, establishing the Alvaston Ranch.  Arthur married Alice Mary Waters on 31 August 1907 in Vernon, indicating on his marriage certificate that he was a rancher near Wood Lake. Alice was newly arrived from Kilsby, Warwickshire, England. Arthur became the first postmaster in the Winfield area, opening the Alvaston Post Office, located on his ranch, on 1 October 1909.1

The accompanying map shows early property owners in the Winfield-Okanagan Centre area, circa 1905. Richard Chatterton owned two separate pieces of land in the area. On 11 October 1904 he purchased three meadowland lots bordering on Wood Lake in Tom Wood’s new subdivision. These totalled 30.7 acres and were suitable for hay production.2 He also pre-empted three quarters of Section 16, Tp. 20, ODYD, bounded on all sides by the extensive cattle ranch of A. B. Knox.3 Although he had applied for the land earlier, it wasn’t until 28 January 1906 that Richard received a Crown Grant for this upland 480 acres.

Richard and Arthur’s mother died in England on 1 May and their father on 2 November 1909.  Richard apparently decided to relocate to England at that time. He sold his interest in the Wood Lake lots4 and likely also the Alvaston Ranch to Arthur. Both men returned to England after their father’s death, Richard and family in late November and Arthur and Alice in December 1909, likely because their father’s will was probated on 30 November 1909. The combined value of the senior Chatterton’s estate at probate was £38603 (over CAD 6 million current value).

In 1911 Richard was living with his wife, his daughter Gwynith, and a second child, Margaret Jane (b. 5 June 1909), in East Barnet, England, a town just north of London. A third child, Helen, was born on 16 March 1915. Arthur’s occupation was “coal merchant,” likely a remnant of his father’s business interests. In 1919 Richard returned to BC, through Vancouver, via the Empress of Russia, this time entering Canada as a “visitor.” He was en route to Hong Kong but he indicated that he planned to travel inland on a CPR boat. Richard was undoubtedly on a scouting trip because the next year he entered Canada to “settle.” Richard’s name does not appear in the 1921 Canada Census so apparently he did not remain in Canada. It is difficult to trace Richard Chatterton and his family after 1921 other than with tiny bits of evidence. For example, on 17 June 1932 the two Chatterton girls, Gwynith Mary and Margaret Jane accompanied by their mother boarded the M.S. Sibajak bound for Tangier, Morocco as art students. Their address was 15 Leicester Sq. W.2. London, a high-end address. They returned on 11 July 1932 aboard the Indrapoera. In the 1939 Register for England and Wales, the family was living in Kent (Tudor Cottage, Seven Oaks Road). Richard was listed as “an artist, painter of pictures,” Margaret as a commercial artist and Helen as a photographer and kennel manager.

The accompanying photograph indicates some aspects of Arthur and Alice’s life on the Alvaston Ranch. The couple are riding atop the hayrack as they pass through the ranch gate. This hay would have been transported from the meadowland bordering Wood Lake. Notice the neat little cottage in the background. 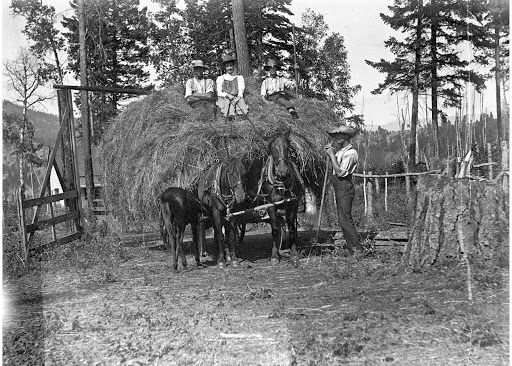 The second photograph shows the rough-hewn log barn, wire fencing and a substantial haystack at the Alvaston Ranch5.

Arthur returned from England to operate Alvaston Ranch but tragedy hit the family on 2 December 1912. Arthur was killed when the gunpowder that he was heating in his oven exploded, leaving Alice a widow. On 12 August 1913 Alice married Guy William Justice Ford, an Englishman from Kent, England who for a time operated the Alvaston Ranch as well as managing the two properties of Fleetwood Wilson, the V Bar V ranch in Oyama and the Irrawarra Piggery at Whiskey Cove. In 1921 the couple was renting the five-room house, “Alvaston, Waterside Ranch” in Sunnywold, likely on Wilson’s Whiskey Cove property. The Canada Census lists three children, Gladys Violet Mary (b. 17 March 1914), William Augustus Justice (b. 1916), and Joan Etheldreda (b. 2 May 1917). Unfortunately, Guy Ford died on 23 June 1924 after an illness. Alice and family moved to Vancouver and the family later dispersed. From a 1939 Sweetgrass Montana border-crossing document, we learn that Gladys crossed into the USA in the company of her mother, her brother, William, and her sister Joan (Ford) Racey. At the time, Gladys was employed as a stenographer in Vancouver, William farmed in St. Hilda, AB, and Joan lived in Winnipeg, married to a businessman.

The Chattertons were like many other Lake Country pioneer families – English men and women with good family connections. Some settled to become long-term residents, while others, such as the Chattertons, faced tragedy locally or sought opportunities elsewhere in the British Empire.

3In 1906 Arthur B. Knox sold his large property to the Maddock brothers, who went on to establish the Okanagan Valley Land Company. On the accompanying map the boundaries of the subdivision served by irrigation by the OKVL Company are outlined by thatching.

4Arthur took out a six-month mortgage on those properties on 9 November 1909, short term because he expected a substantial inheritance.

5Both photographs are from the Gleed Collection, Lake Country Museum and Archives.