Promoting the Okanagan Valley is not new. Various local governments, Chambers of Commerce, and Tourists Boards eagerly expound the virtues of living in this wonderful part of British Columbia. However, it is important to acknowledge that this promotion is not a recent phenomenon. Indeed, a glowing description of the Okanagan Valley – including its untapped and vast agricultural potential – appears on pages 64 and 65 of the “Guide to the Province of British Columbia for 1877-8”.

No doubt, contemporary readers of this description would have been hard-pressed to resist the temptation to pull up stakes and acquire land in the wonderous Okanagan Valley, confident that a prosperous and successful future awaited them and their families.

The aforementioned 1877-8 description of the Okanagan Valley reads as follows:

The lake, 70 miles long by 1 ½ miles wide; country to the east of it a fair sample of the best districts between Rocky and Cascade Ranges; open, grassy hills, dotted with trees like English parks, successive hills and dales; lake, ponds, and streams full of fish; soil much the same general character as the Similkameen; rich sandy loam, substratum of clay in some valleys, stretches of “bottom” land, some alkali patches; settlers coming in fast and taking up land since Canadian Pacific Railway survey began. Those who would have “sold out” a year ago are now tilling and improving their land. It is said that in the Okanagan and adjoining districts, there is room for a farming population of 10,000 souls (allowing 160 acres for nine persons). Roman Catholic mission-post (1,100 feet above sea-level) on the east side of the lake; fine country behind it. On the west side of the lake, a little distance back, runs a low mountain range from which detached spurs press upon the lake, and rise above the water in precipitous bluffs; excellent pasture, particularly on the small spits jutting into the lake. The Cherry Creek Silver Mine has been abandoned for the present.

Near the north end of the lake is an Indian reserve of very choice land.”

Following this physical description, there is a list of some of the early Okanagan settlers. It should here be noted that all of those settlers who were listed were men; there was no mention at all of the local First Nations, Chinese, or women who were then living in the Central Okanagan. The following settlers, many whose given names were misspelled, were living in the Central Okanagan in 1877-1878: 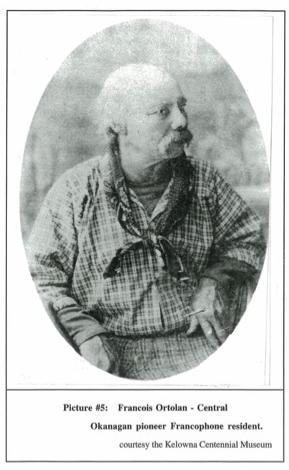 This list shows that many of the early non-native residents were of francophone origins: Blondeau, Boucherie, Christien, Lacerte, Laurence, Lequime, Ortolan, and Verselle. For many years the Central Okanagan was a very French settlement, French being the first language of a number of the earliest pioneers. With the passage of time, most of these early French surnames disappeared and, by the late 1890s, there was only a small number of local residents of French origins. Many of these francophone names are now remembered only through their attachment to local roads and geographical features, serving as a reminder of an important aspect of our local history.1

1 Robert M. “Bob” Hayes. Robert Michael Hayes is a life-long resident of the Okanagan and is a descendant of the pioneer Clement and Whelan families. He is a director of the Lake Country Historical and Cultural Society and a life member of the Okanagan Historical Society. This article is part of a series, submitted by the Kelowna Branch, Okanagan Historical Society, which appeared in the Kelowna Daily Courier. Additional information would be welcome at P.O. Box 22105, Capri P.O., Kelowna, B.C., V1Y 9N9.