The vision of a recreational corridor depends on residents digging deep.

Fundraising for the Okanagan Rail Trail between Coldstream and Kelowna began Tuesday, May 17, 2016 with the launch of a $7.86 million campaign.

“This is a lot of money. However, if we each give what we can and encourage our friends, family and neighbours to give as well, we can build this trail quickly so that our communities start receiving the benefits,” said Duane Thomson, with the Okanagan Rail Trail Initiative. “What a legacy we are creating.”

The corridor was acquired by local jurisdictions but the goal is to now raise the funds to construct a 4.6 metre-wide compacted, crushed aggregate trail.

“This amazing and scenic 48.5-kilometre trail has the potential to become a world-class recreation corridor appealing to residents and their guests as well as international tourists,” said Thomson.

All donations are received by the Community Foundation of the North Okanagan and the Central Okanagan Foundation and will go towards the development of the trail in its entirely.

Donations can be made online at http://www.okanaganrailtrail.ca or by contacting one of the foundations.

“More than donations are required to make this trail happen,” said Brad Clements, with the Okanagan Rail Trail Initiative.

“Individuals, businesses, clubs and service groups are encouraged to visit the website and hit the Get Involved button. Getting to this target will require a myriad of trail ambassadors, campaign partners and business partners. It will take a community to build this legacy.”1

Progress on the trail is evident as the CNR is currently removing the rail ties and levelling the corridor. Next will come environmental remediation.

“Over the past months the new owners of the rail trail corridor (Kelowna, Lake Country, the North Okanagan Regional District and the Okanagan Indian Band) have cooperated to lay the preliminary framework for building a hard-packed trail from Coldstream to Kelowna. It is now up to all of us to raise the $7.86 million that the trail is expected to cost.”3

“How do we get there? One metre at a time. If you look at the population along the trail we have about 220,000 people between Kelowna, Lake Country and greater Vernon so if one in four or five people write a cheque [for $160 — one metre], we are there.”4

Show your interest and support by visiting the Okanagan Rail Trail website. Find out the facts, follow the growth (donation totals will be updated each Monday) and watch this amazing trail progress. Donations of any amount will be appreciated. 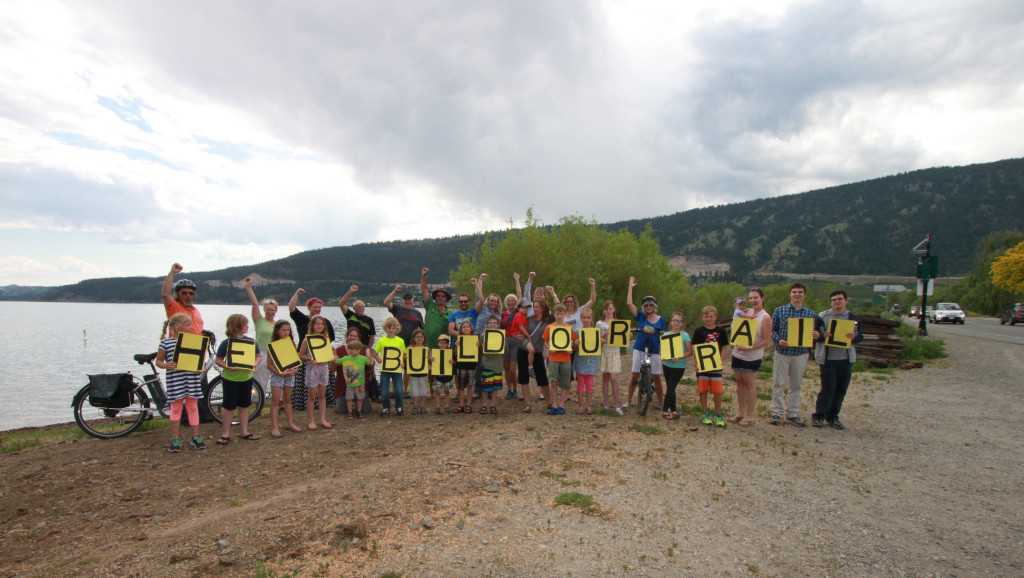 Previous blog posts on the Lake Country Museum and Archives website provide some of the background on the acquisition, and progress of this rail corridor:

January 2016 Removing the tracks and April 1, 2016: Okanagan Rail Trail — picking up the spikes and plates

2 All photographs by Duane Thomson.

4 Brad Clements in “Okanagan-Wide Project. Fundraising to begin for Rail Trail” by Kevin Parnell. Lake Country Calendar, May 18, 2016, p. A7.

5 Slogan for the Okanagan Rail Trail.