Lake Country Museum and Archives has received a donation of McCarthy family photographs from Donna Day of Winfield. Her late husband, Max Day, found a package of family photographs in the old McCarthy barn, which was an iconic historical building situated on Bottom Wood Lake Road. The photo featured here is of an early logging operation on the Winfield flats.

The bottomland in the area of the McCarthy farm was heavily forested and it needed to be cleared before farming could be successful. The opportunity to market these logs came in 1908 with the opening of the navigation canal through the isthmus separating Wood from Kalamalka lakes. Johnson and Carswell operated a sawmill at the north end of Kalamalka Lake and they engaged a tugboat, the Maude Allen, to tow log booms from the littoral of what was then called Long Lake to their mill. One of the first areas to be logged was the Winfield flats. Logs were transported to water’s edge at the south end of Wood Lake during the winter and left in stacks on the ice. The route was directly along the flats, the wagons or sleds carving out a road which was to become Bottom Wood Lake Road. After the easily accessible timberlands were logged off, operations moved to the hillsides, especially on the west of the valley on lands being developed by the Okanagan Land Company. Still later, logging operations moved further afield, to Fir Valley and to the uplands on the east side of Kalamalka Lake. (A previous blog dealt with logging chutes that sent logs shooting down the hillsides to land in the water.) 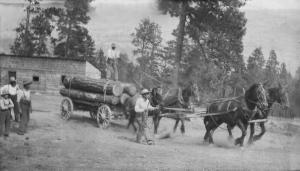 This particular photograph must have been taken shortly after 1908, when logging operations began. Ernest McCarthy was well known for his good teams and it is likely him driving the lead team from the ground. Of Irish stock, he had immigrated to Canada from England in 1901. His wife, Dora, had immigrated in 1904. They married and were established in Winfield by 1907, when their first son, Ernest Justin was born. Other children followed, Kathleen, born in 1908, Maurice in 1912 and Lionel in 1914.

This photograph and others in the McCarthy Collection are available at the Lake Country Museum and Archives. Family photographs are very important historical documents and readers are urged to place them in the archives to protect them for the community.