In the first half of the twentieth century, our local economy was based primarily on the natural resources of the valley. A long growing season and access to water and transportation sustained fruit-growing, farming and ranching opportunities. As well, plentiful prime marketable timber carpeted our hillsides, waiting to be harvested. Between the world wars, our region and our province began to build and that required lumber. Larger mills like Kelowna’s S.M. Simpson operation were few, offering an opportunity for small operators to step in.

One such start-up was OK Sawmills that commenced operations locally around 1940 as a partnership between my dad, Clare Gibbons, and his brother Harry of Ellison.  Such operations were often referred to as “haywire” mills, a good-natured reference to the common use of haywire to affect a temporary repair. For the next few decades, they would log and mill timber at a series of locations above southeast Kelowna.   A few that I recall include Canyon Creek, Priest Creek, Little White and an area just south of Ruth Station on the KVR. At one point a small tie-mill operated on the Blanliel property in East Kelowna.

A limit or cut-block would be approved by the Province for selective logging. When that limit was exhausted, the entire operation would move on to the next location. While large mills moved the timber to the mill, those small operations moved the mill to the timber.

The logging and mill operation was simple and basic. Timber was felled and limbs removed for skidding, usually directly to the mill. In early days the skidding was by a team of horses, later with a crawler-tractor. The logs would then be rolled with cant hooks onto a moving carriage. This moved back and forth through the head-saw, turning a log into dimension lumber, slab-wood and sawdust. Trim saws cut to length and the product could then be planed as required.  At the heart of this was a diesel power unit running all the needed belts and chains.

While the mill produced lumber for construction, in those early days with WW2 raging, rail transportation was critical. Wooden ties for the rail-bed were essential and OK Sawmills produced them by the thousands.

While the ability of these mills to follow the wood supply provided an economic advantage, it levied a heavy toll on the operators and workers. The men lived on-site in tiny, temporary cabins built of whatever was at hand. A wood stove provided heating and cooking, light was by kerosene lantern and a privy sat out back. The mill-hands worked under conditions that were always difficult and sometimes dangerous. They worked long, backbreaking hours with no protection from the heat of summer or the snow and freezing temperatures of winter.

In this photo, Sharon and Richard Gibbons played in the clearing that was the temporary camp for sawmill workers. Notice the makeshift cabins in the background. 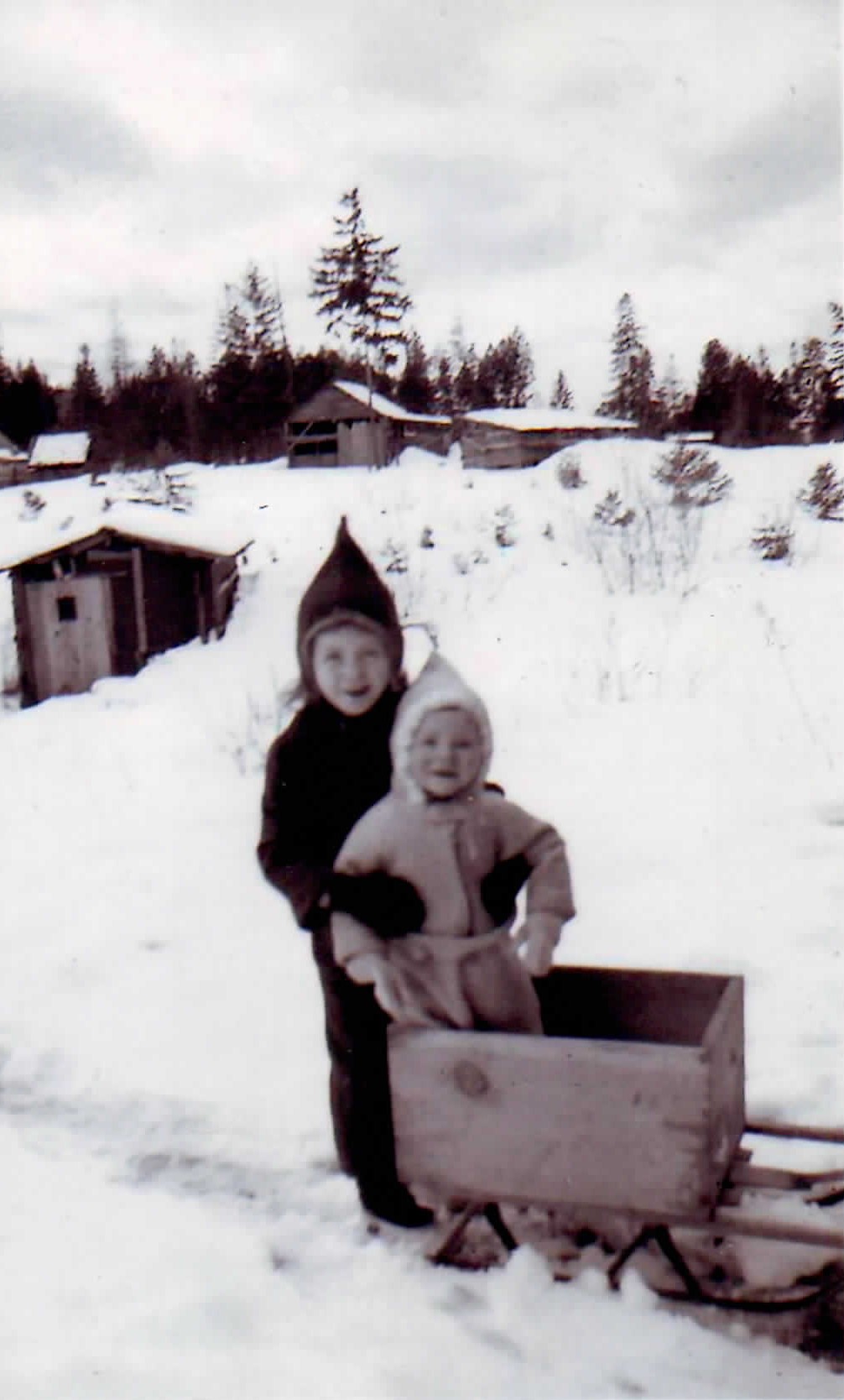 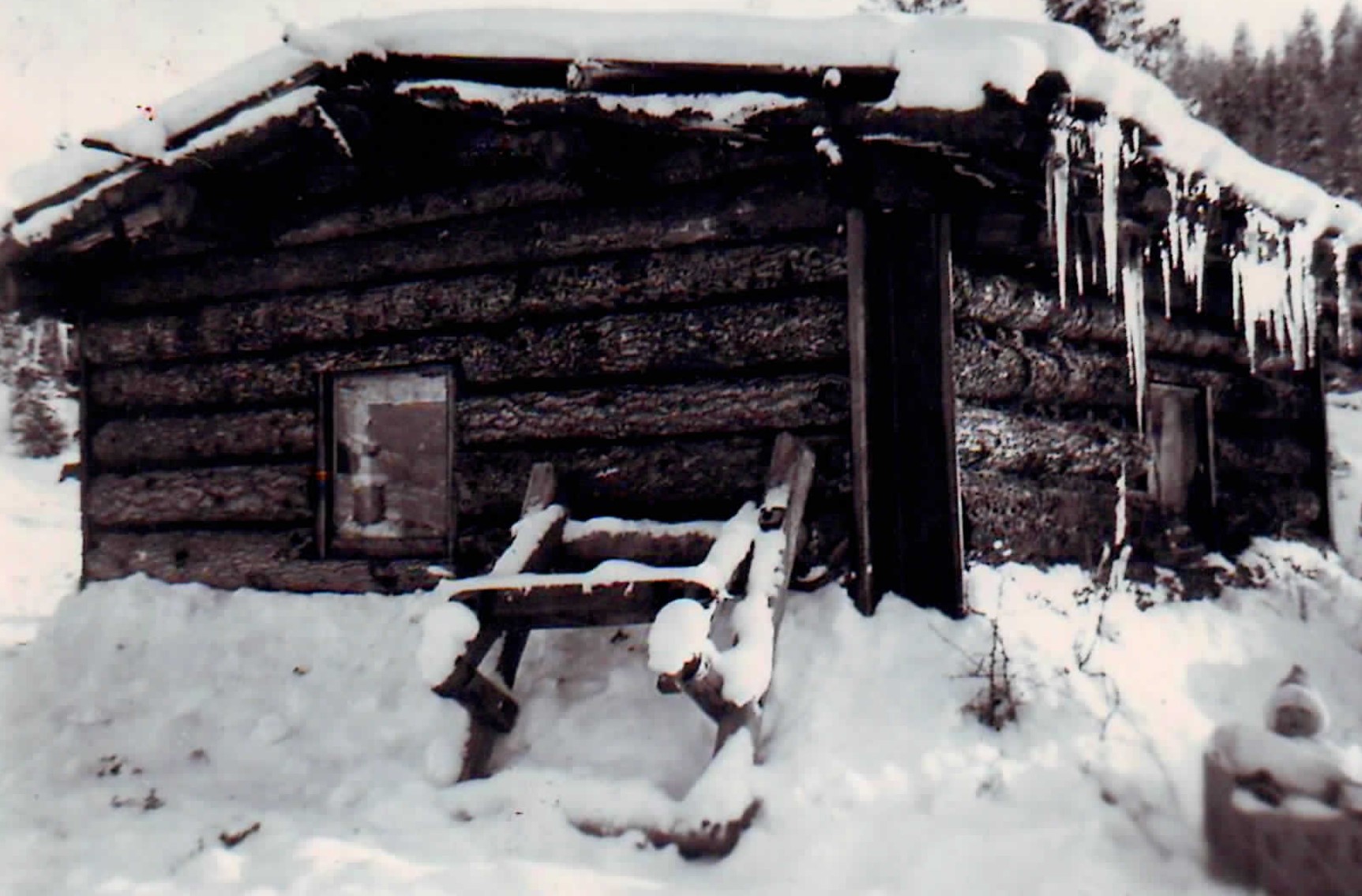 For the first years of my life, home was the cabin I shared with my mom, dad and sister Sharon at the base of Little White Mountain. It was perhaps twelve by sixteen feet and constructed of milled slab-wood giving the appearance of logs. Mom often cooked for the men, no easy task given the lack of electricity and running water and two toddlers underfoot.

Friday afternoons the mill would shut down and the men would head home before returning Sunday evening.  A few of them that I recall were Slim and Albert Coghill, Walter Palmer and one of the Uppenborns.  Locals included Murray Sherritt, Art Walker, Errol McCarthy, Buck and Les Pow and Paul and Gerry Holitzki.

OK Sawmills was a major employer in the Winfield and Okanagan Centre area. It provided regular paycheques to local workers and products critical to our fast-growing local economy. I have good memories. 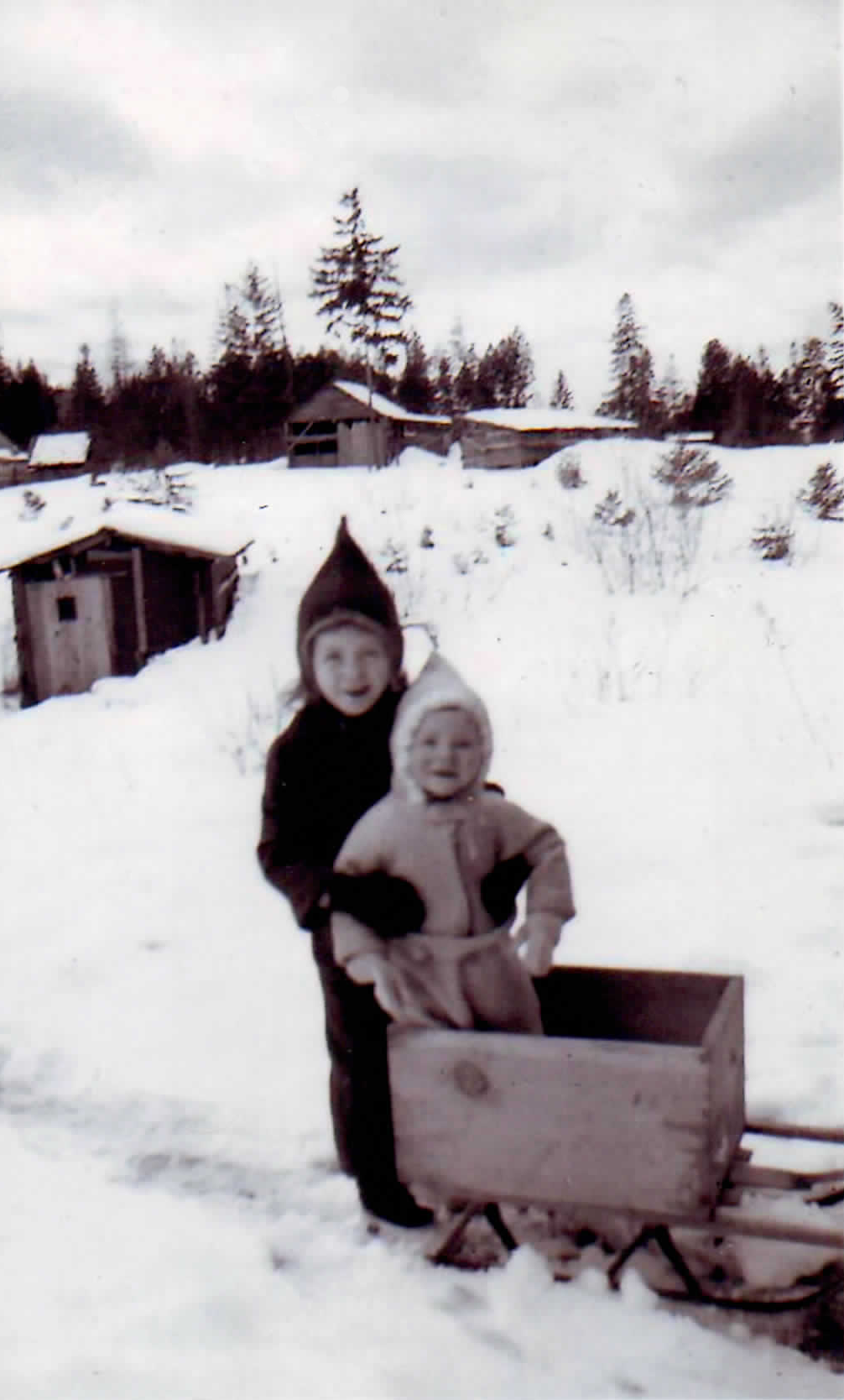