Following an earlier blog post on Spion Kop I received an e-mail from Vancouver resident Douglas Broome1. He sent such an interesting followup to the post about Spion Kop that I asked if I could share it with our readers. It follows below:

“My parents [Ernie and Helen Patterson Broome] bought a transcendentally beautiful paradise with 40 acres and a half-mile of lakeshore in 1951. My father developed an orchard while my mother founded a girls’ camp called Kopje, so named because the hill behind was known as Spion Kopje. My childish understanding was that the old house (now restored for Kopje Park) was built by a Boer War veteran of the Spion Kopje battle who also planted an apricot orchard with an old species whose fruits were the size of a large peach.

The camp carried over the African theme with girls divided into the Watusi, Pygmy and Zulu tribes, and living in cabins called Kaboola, Kabasha and Kaleema. Though a girls camp it also permitted four boys who lived with me in a tent platform called Kembo. The camp had horses and a riding program with abundant trails through the hills where we bedded down marvelling at meteorite showers and the entire glowing Milky Way. (There were only a few farmhouses along the clay Carrs Landing Road.)

Campers returned year after year, nearly all of them coming from three private schools: York House, Crofton House, and Strathcona. The few old campers I have met uniformly regarded Kopje as the happiest time of their childhood, such was the near spiritual beauty of the place. 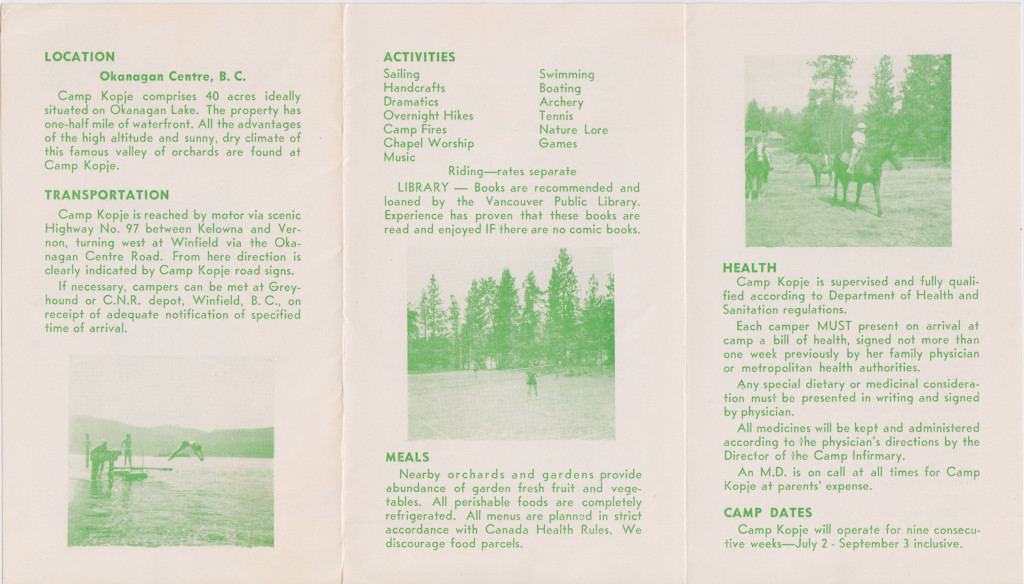 Following my parents’ deaths, the property went to ruination due to neglect, orchards diseased and dying, the extensive buildings and waterfront facilities vandalized and stripped. However the central portion was bought by the regional district. During the restoration of the old house2, known to us as Kenya, the skeleton of a young first nations girl was discovered buried close to the house, and I think of her lying there amused by all the laughter and gambols of her wealthy white sisters, a haunting image of a haunting place.”

1 Douglas Broome was a summer resident of Lake Country from 1951 to the 1970s, and attended George Elliot Secondary School in 1996. Broome has provided the Archives with additional information on Camp Kopje. He kindly supplied the photographs and pamphlet (click to enlarge these). Douglas Broome has been a blog subscriber since 2012.

2 The “old house” is now known as the Gibson House.