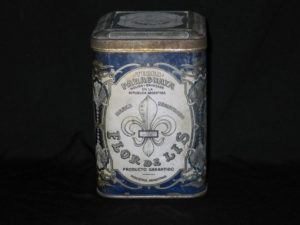 A tin can from the large collection on display in the “general store” at the Lake Country Museum is an interesting artifact. This can was shipped from Spanish-speaking Argentina, under the label Flora De Lis. This packaging was commonly used from 1907 until 1942 when international demand for the enclosed product diminished.

The can held the plant, Paraguaya, the leaves of which produce a tea beverage called ”mate” common to Brazil, Argentina, Paraguay and Uruguay. The main ingredient is caffeine. The Paraguaya leaves are dried, chopped, and ground into a powdery mixture called yerba, which means “herb”. The beverage is traditionally prepared in a gourd (also called mate in Spanish), from which it is drunk. The gourd is nearly filled with yerba, and hot water.

According to Wikipedia, mate is traditionally generally drunk in a particular social setting, such as family gatherings or with friends in Paraguay, Argentina and southern Brazil. The same gourd (cuia) and straw (bomba/bombilla) are used by everyone drinking. One person (known in Spanish as the cebador) assumes the task of server. Typically, the cebador fills the gourd and drinks the mate completely to ensure that it is free of particulate matter and is of good quality. The cebador subsequently refills the gourd and passes the gourd to his right.

The ritual proceeds around the circle until the mate becomes lavado (washed out), typically after the gourd has been filled about 10 times or more. When one has had one’s fill of mate, he or she politely thanks the cebador, passing the mate back at the same time.

In Uruguay, people commonly walk around the streets toting a mate and a thermos with hot water. In some parts of Argentina, gas stations sponsored by yerba mate producers provide free hot water to travelers, specifically for the purpose of drinking during a journey. Disposable mate sets with a plastic mate and straw and sets with a thermos flask and stacking containers for the yerba and sugar inside a fitted case are available.

One wonders how this tin found its way into the Okanagan Valley in early days.