The fourth heritage marker panel examined in this series is entitled “Water before Rail,” dealing with the transport of fruit and other goods by water, roughly between the opening of the canal connecting Kalamalka and Wood lakes in 1908 and the completion of the Canadian National Railway (CNR) line to Kelowna in 1924. This panel will be erected on the Oyama isthmus. Don McNair prepared this panel and the accompanying map.1 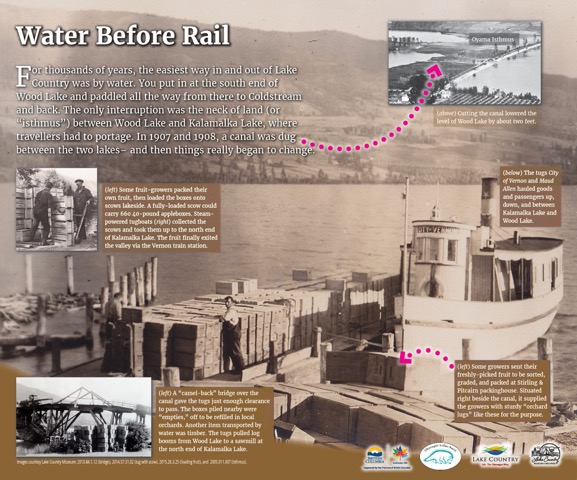 As a complement to the information on this panel we offer some newly uncovered information about the era. In 1973 Duane Thomson interviewed one of the original pioneers in Oyama, Floyd Whipple, and has recently uncovered his notes.

Twelve-year old Floyd Whipple accompanied his parents, William and Isabella, to Oyama from the United States (via Alberta) in 1908. Floyd worked at various jobs in his lifetime, box making, labouring for the Wood Lake Cannery, planting orchards for the Newtons, Towgoods, Whipples and Youngs, working for the BC Fruit Shippers packing house and for the Rainsford Ranch, and road foreman for Oyama roads.

One of the topics that Floyd discussed was the steamboats plying Kalamalka and Wood lakes when he was a young man. Floyd recalled that even before he arrived in Oyama, small tugs pushed scows loaded with up to 1000 boxes of apples to the north end of Kalamalka Lake from where they were taken to Vernon for shipment by rail. Johnson and Carswell, owners of the sawmill situated at the north end of the lake operated the Alert, a steam vessel with a screw prop, for some time before it was junked. The Alert was followed by the City of Vernon, captained by Larry Carswell, the son of Bob Carswell. This vessel was the first steamboat through the new canal in 1908. It was taken to another lake about 1924-1925, after the CNR line was completed from Coldstream to Kelowna. Arthur Oakley was the Johnson and Carswell engineer and captain and likely captained the Maud Allen that operated throughout this time. This steamboat ended its life tied up at Crawford’s Beach, used by local children for diving into the lake and for change areas. The Maud Allen was eventually hauled from the lake to Vernon. Whipples operated their own boat with Jim Silver as engineer but one day it lost power because of a broken pipe and ended up being pounded on the rocks on the west side of Wood Lake before being towed to the canal, fate unknown.

Floyd also recalls the wharves and landings utilized by these boats for loading fruit and other products. He reported that “boats used to come down and leave goods on the wharf. You didn’t touch it. Once John Stokes (Mrs. Allison’s cousin) had a case of whiskey on the wharf for weeks. Only McHardie took a drink – he was loading the wharf with potatoes.”

Floyd recalls wharves at the Wood Lake Cannery, at the Sterling and Pitcairn packinghouse near the canal, at Petrie’s Corner (Oceola Wharf), and at the properties of George Goulding and Edgar Trask. (Floyd neglected to mention his father’s wharf but other sources indicate that it was likely located at the foot of Crawford Road). At other locations, such as the Campbell-Browns (now Crystal Waters), the scows would pull right up and load directly from the shore.

1 As noted earlier, this project which was designed by Don McNair, of McNair Editing, and prepared by the Lake Country Museum and Archives, is supported by the Province of British Columbia through the British Columbia | Canada 150: Celebrating B.C. Communities and their Contributions to Canada grant program.

Earlier blog posts about these heritage markers are available on this website: