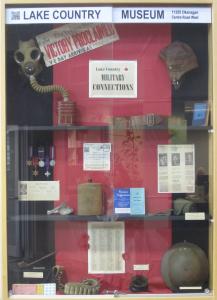 The Lake Country Museum’s latest satellite display at the District of Lake Country is entitled Lake Country Military Connections. Some of the interesting artifacts include a gas mask made in 1939, an Air Raid Patrol helmet, a WWI bayonet, puttees, a compass from a Lancaster Bomber, ration stamps, and items from a soldier’s kit. Medals awarded to Pilot Officer Jack Friesen, who was killed during WWII, are displayed. There is also a list of people from Lake Country who served in the military. Artifacts were donated to the museum by the McDonagh, McDonald, Richards, Sproule, and Whipple families. Copies of Mary Carne’s (nee White) scrapbook were also used.

We extend a Thank you to Museum volunteers Karen and Glen Gibbons who mounted this display.