The song A Helmet and a Cross bears very special meaning for all those who have experienced a loss of a loved one, particularly as a result of conflict. It also has very special meaning to many who have resided in the Lake Country area for many years as it was written by a local “son” describing his own feelings of loss. The songwriter and performer is Rhett Davis, who grew up from a young age in Oyama before leaving to follow his musical dream. 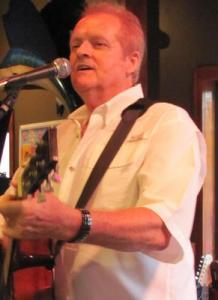 Rhett Davis’s birth father died overseas in World War II and he was raised as Steve Dungate, after his mother married Ron Dungate. He attended Rutland Senior Secondary and established a band called The Emeralds before transferring to the new George Eliot High School in Winfield, where he graduated as a member of the first grad class in 1960. Around that time he reverted to the surname of his birth father and became Steve Davis, then later as his musical career blossomed, Rhett Davis. After high school, along with local friends Jack McCarthy and Don Christian, he became part of The Winmen. This group went off to Nashville where they were taken under the wing of Floyd Cramer. After the group disbanded, Rhett continued his musical career with The Hilites, a career that has spanned forty-five plus years.

Rhett married his high school sweetheart, Laurie Arnold, who is a member of the pioneer Arnold family. Laurie and Rhett have lived in Winterpark, Florida, near Orlando, for many years but still retain strong ties with friends and family in the Lake Country area.

This song is particularly poignant as Remembrance Day approaches. To listen to Davis singing this song link to his website and click on A Helmet and a Cross (in memory of the fallen). On the site Davis explains the background of this memorable song.