Recently, I wrote a short article about our family cabin on Clement Road, at the south end of Wood Lake. In this article I made reference to the adjacent campground and cabins known as “Sam’s”. This facility, also known as Wood Lake Resort, was a popular tourist destination for many years in what is now Lake Country. 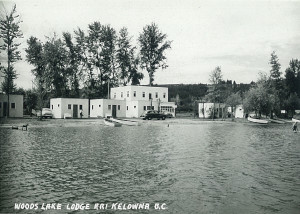 Wood Lake Resort consisted of several small square cabins adjacent to the beach, a large lodge, and a camping area behind the lodge, flanking the south side of Bottom Wood Lake Road.

The cabins were small and box-like, with stucco on the outside walls – certainly a contrast to today’s lakeside accommodation. I never had the opportunity to actually go into any of these cabins, but I should imagine that they were rather Spartan but clean and comfortable.

The lodge seemed massive to me, several storeys high, painted white with green trim. As I recall, the front entrance faced Wood Lake, and I believe you had to climb several stairs to get into the lodge. The front door was usually open during the day, with a screen door to keep out the bugs. I can still hear that screen door slam behind us, as we entered the cool confines of the lodge. Inside the lodge, there was a long counter with stools attached to the floor, allowing customers to sit at the counter as they had their ice-cream cone or hot dog. Pop was served in glass bottles, which were kept cold in a large metal cooler, emblazoned with the name of the soft drink, usually Coca Cola or Pepsi Cola. Other popular flavours of pop were Suncrest Cream Soda, Canada Dry Ginger Ale, Tahiti Treat, and Hires Root Beer

The campground was always full, with tents set up close together, cheek to jowl, affording very little in the way of privacy. Sometimes there would be small trailers parked in the campground, and their owners thus had the luxury of a bit of privacy. This was long before self-contained deluxe recreation vehicles became popular. Camping was generally very basic and I can still recall thinking how dusty life must have been for these campers, since Bottom Wood Lake Road was then not paved.

Wood Lake Resort is now but a memory, and has suffered the fate of so many other lakeside resorts.

Source: Hayes, Robert. Bob Hayes is the great-great-newphew of Lake Country pioneers Thomas Wood and Nellie Whelan Wood, and a Director of the Lake Country Heritage and Cultural Society.