The days are growing shorter and cooler and the colourful summer birds that came north to breed and raise their young have gone south in search of warmer temperatures and food. So it’s time to turn our attention to birds that stay here in fall and winter. Where better place to begin than with the familiar California Quail? 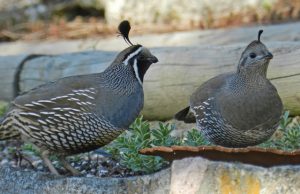 Male on left, female on right.

I am sure you recognize them and their distinctive calls.  They are the most widespread of the western North American quails, thriving in a wide variety of habitats, from cities and gardens to farm fields, grasslands and orchards. Their range is confined to the mid to low elevations of our mountain valleys from southern BC through central Oregon and the other western states, as far south as Baja California. Because of their adaptability and popularity with hunters they have been introduced to New Zealand, Australia, Chile, and other places outside North America. 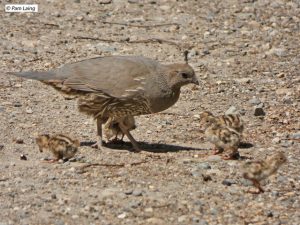 Standing only about 9 – 11” high/24 – 28 cm these are gregarious birds, flocking and feeding together in the non-breeding months of fall and winter. They feed mainly on green leaves and other plant matter, but will come to feeders for corn or mixed seed and occasionally eat insects too. The male bird sports a distinctive topknot that curves forward over his head. He is grayish with scaled and darker feathering here and there, lovely when seen closely. Female birds often look browner, a camouflage technique helping to hide them while they are on the nest. Creating their nests on the ground in a shallow depression lined with grasses and hidden by vegetation, they lay 10 – 12 eggs and usually raise only one brood annually. Occasionally a pair will raise a second brood later in the season. When the young hatch they are precocial, which means that they can forage for themselves immediately. 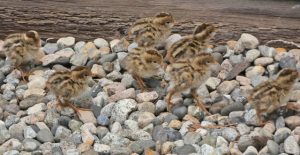 My husband thinks the newborn chicks look like walnuts on toothpicks! They are quite endearing. The tiny chicks are ushered by the parents in a family group from place to place, very vulnerable to predators such as cats, raccoons, owls and hawks. We have all seen the large numbers of tiny chicks being gradually reduced to a handful of luckier survivors. It is my understanding that quite often a non-breeding male, perhaps an uncle, will help guard and raise the brood. It’s often this bird that you see in a prominent place, attracting attention with his calls while the parent birds gather their brood and try to get them to safety. It’s not a bad survival technique, if you think about it.

Teenager asleep under a hedge.

Like other chicken-like birds, quail are most partial to dust baths, tossing loose soil or dust over their bodies to help discourage lice and mites. Watching a parent bird teach the tiny chicks how to do this is amusing. Even if you don’t feed birds, you can attract them to your garden by providing a shallow dish from which they can drink. I was charmed to find when we moved into Kelowna from Lake Country that my dish was quickly found that first summer by the quail and has been patronized by them and their offspring ever since.