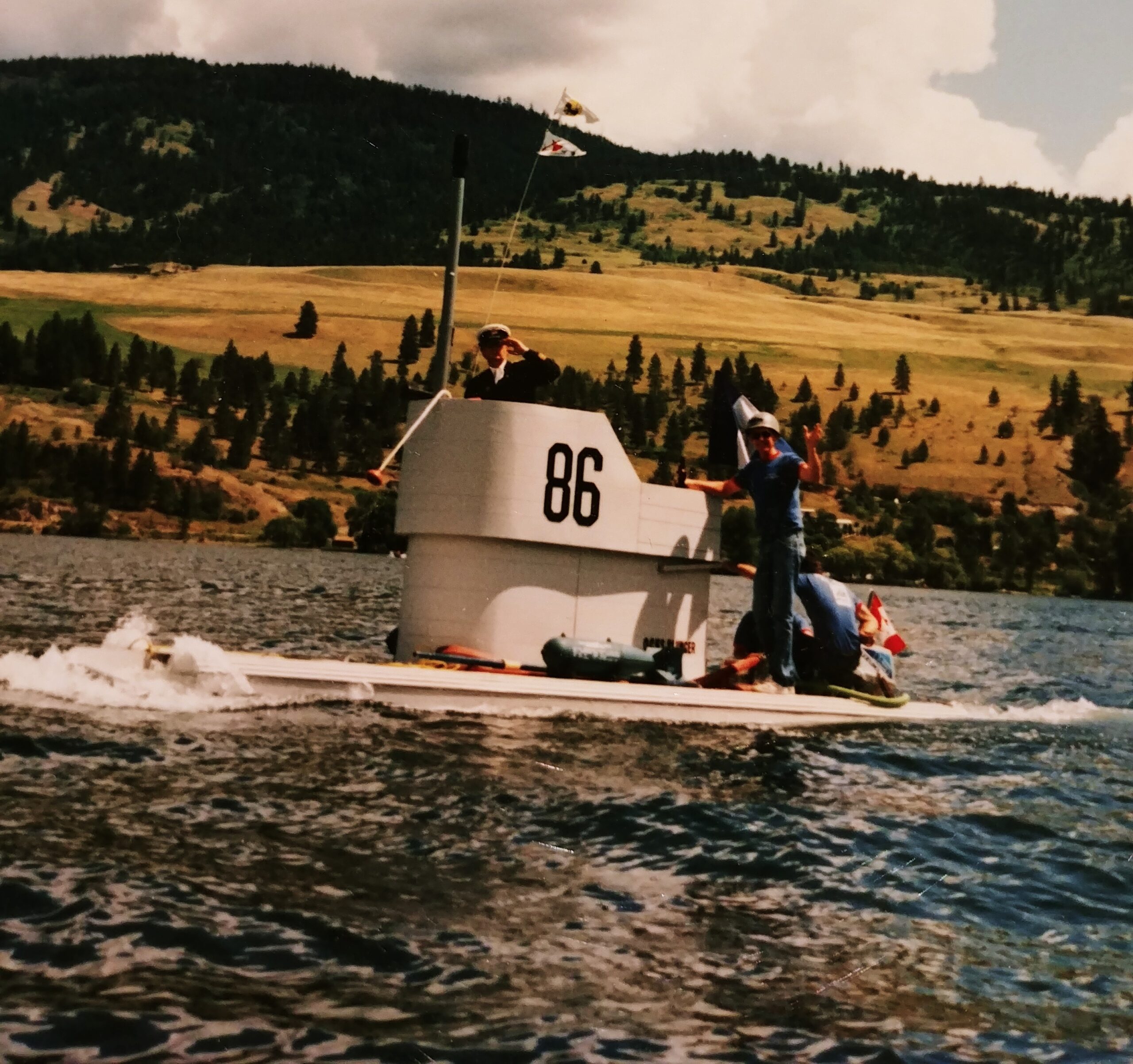 In the summer of 1986 a casual glance out to the beautiful waters off Okanagan Centre just might  reveal the unmistakable profile of a submarine conning tower.

No mere illusion brought on by sun and beer this was the Henry D. Redecopp, pride of the Okanagan  Centre Navy and the brainchild of a small band of local patriots.

Legend suggests that once conceived her design team worked quickly and efficiently encouraged by  a steady supply of Old Style and Kokanee. A suitable shipyard was identified, the yard of Michael  and Patti Wentworth, and construction began. Her builder was the veteran mariner Tobias Redecopp who also went on to crew her through many navel engagements.

In a concession to environmental concerns the HDR was not nuclear powered. Rather, high-thrust  propulsion was supplied by Johnson, later upgraded to Mercury.

The extent of her armaments remains classified although deadly torpedoes were clearly visible,  reportedly acquired from a Vernon arms dealer code-named Surplus Herby. Soon the HDR was  ready for her first critical and dangerous assignment, patrolling Lake Country Days.

A motley crew was assembled. First Commodore Robert Mercer, aka the Mayor of Oyama, selected only the finest. Thus, Admiral James McLellan, a steely-eyed veteran of many (courtroom) battles  was placed in command alongside First Mate Rene Cote.

Lake Country Days was renowned nationwide. It was a glorious week with a parade, Miss Lake  Country events, competitive ball tournament, kids’ fun day and Firemen’s BBQ. For a few years the  star attraction was the renowned Outhouse Race, complete with a submarine escort providing safety  and security.

The HDR also provided fire protection. Her high-powered water pump could quell any shipboard fires  as well as hosing down competitors who seemed overheated or “unruly”.

The HDR’s finest moment may have been in 1987 when our navy provided escort service for boats  ferrying the Prime Ministers attending the Commonwealth Conference held at Lake Okanagan  Resort.

Having served with distinction and with peace returning to our valley she was retired and now lives on  only in our history and the memories of all who remember those days of glory.