There is very little common about the Common Loon! This iconic bird of northern lakes is remarkable, supremely adapted to living on and in water.

They are large, fish-eating birds that capture their prey by diving and chasing them underwater. Watching a loon fishing underwater from a boat, a lakeside dock or an elevated bank, for example, you can see how easily they twist, turn and pursue their target. People who like fishing know well that loons will follow their boats and dive to steal a hooked fish as soon as the rod tip dips! They are often successful too.

Loons are longer-bodied than ducks and have straight, dagger-like beaks. They average 32”/~90 cm in size with a wingspan of close to 4 ft./over 1 m. They weigh about 9lbs/4 kg or more. In summer breeding plumage the markings are boldly patterned, with a white and a black band around the neck, a checkered black and white back, a white belly and a red eye. If a loon looks straight at you, you can see that its head is completely round, the wicked fish-spearing beak a formidable weapon, adapted to underwater hunting. 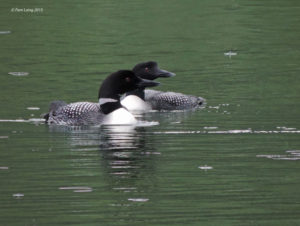 A loon’s legs are set so far back on its body that it can hardly walk on land, however. Nest sites are floating platforms of aquatic vegetation at the edge of the water, often concealed by rushes or shoreline shrubs. A sitting loon female will hunker right down over her eggs protectively, remaining absolutely still while a perceived danger is near.

When the chicks hatch, (one or two only) they are carried on a parent’s back for a few days. As they are so vulnerable to predators such as gulls or eagles at this stage, the loon parents will often seek out a small shallow pool off the main water body where the young can be protected while they feed and grow. During these critical days, the parent birds feed their young tiny fish, some plants, crayfish and other crustaceans but as they grow larger their diet becomes almost entirely fish-based. It takes eleven or twelve weeks for the young to reach maturity, a race against time in far northern short summers.

Loons which breed on our plateau lakes will mostly winter at the coast on estuaries or shallow bays, from BC as far south as Mexico. But each fall large numbers of loons gather on larger lakes to feed up before their migration journeys. They can often be seen off south Lakeshore Road in Kelowna at this time, late September into October. Listen for their soft murmuring calls to each other, quite different from the haunting cries or yodeling with which we are more familiar.

So why are they called ‘Common’? In bird terms, ‘common’ does not mean ‘ordinary’, but merely refers to relative abundance or habitat near humans. (Other types of loon breed only in the Arctic, for example). The European name for Common Loon is Great Northern Diver. If you’ve watched a loon fishing, you know how apt a name that is!