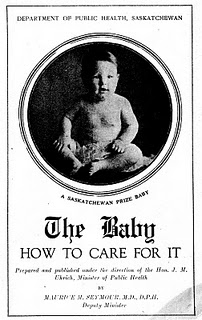 Dan Bruce, our Curator, bought this little booklet to complement our patent medicine collection.  It doesn’t have a publication date but there’s a rudimentary ‘Baby Book’ with a place for a picture and some birth statistics.  Written in pencil is the notation that Our Baby was born March 19th, 1927.  Weight at birth, 7 lbs, and 11 oz.
The forward says:
“This book has been prepared, in order to place in the hands of the mother of the province the best available information collected from various sources, on the care of the baby….
The need for more knowledge on the subject of caring for babies is made evident by the fact that there are on an average 2,000 deaths yearly under 1 year of age.
Investigation goes to show that a great number of these babies died because their mothers did not know how to care for them properly; a large number of the deaths were due to preventable causes, such as disease of the digestive system, owing to faulty and irregular feeding, and pneumonia, bronchitis, etc., due largely to lack of good ventilation.
It is unnatural for a baby to be sick and it is hoped that this book may assist mothers to save, by proper care, many lives lost from preventable causes.”
It was published for the Department of Public Health, Saskatchewan and prepared by Maurice M. Seymour, M.D., D.P.H. Deputy Minister.
Dr. Seymour was a busy man.  He oversaw public health, communicable disease, dairy and milk, hotels and restaurants, water and sewage.  He was instrumental in getting legislation passed to make standards for water supplies and sewage disposal works aimed at preventing contaminated drinking water.  He spearheaded the formation of the Saskatchewan Anti-tuberculosis League and the building of a sanatorium at For Qu’Appelle.  Under his administration, free typhoid vaccine distribution was instituted resulting in a massive decrease in cases of typhoid.
But let us get back to this incredibly optimistic little book.  It contains information on prenatal care, diets for mothers, things which are bad for all babies, including crowded and badly ventilated buildings, pacifiers, thumb sucking, soothing syrups, patent medicine, whisky or gin for supposed coli, dirty playthings, dirty nipples, dirty bottles, dirty floors, waterproof diapers except for temporary use, moving picture shows…and the list goes on.  Birth
Registration is emphasized with a possible $50. Fine for non-compliance. Feeding of baby covers breast-feeding, bottle feeding and summer diarrhoea.  Solid food is discouraged until the baby is ten months old.
There is a small section on making a homemade icebox and bottled cows milk is strongly recommended.  This rather leaves out all the farm folk with milk cows.
There is a section on when to expect teething and the order and timing of the eruption of various teeth.  There are sections on tuberculosis, measles, scarlet fever, diphtheria, whooping cough and smallpox and there is a chart with these diseases listed and the symptoms and probable duration of each.  There is another chart showing weight, height, circumference of head and chest from birth to 16 years of age.
Dr Seymour started Child Welfare Conferences also known as Baby Shows in 1916 at Regina and Weyburn.  Information was given out and eventually included public health lectures, free literature on venereal disease, tuberculosis test for cattle and home nursing classes.  Our little book displays pictures of babies from a Child Welfare Conference in Regina.
Under Dr. Seymour, the work of the Public Health Department was greatly enlarged and included among many other things, maternity grants to discourage unattended home births.  Public health nurses taught women’s groups and gave public demonstrations in prenatal, natal and infant welfare in rural areas.  Our book is probably one of the results of these.
This tradition of mobilizing government to improve the health of the general population continued through the depression and the Second World War and eventually, in 1962 to the Medical Insurance Act. The federal government enacted medical care legislation in 1968 and by 1972 all provincial and territorial plans had been extended to include doctors’ service.
I am old enough to remember my mother worrying about the expense of taking my to the doctor for x-rays when I fell a few feet and slammed my head into a steel beam.  [I was playing where I had been specifically told no to play]  We were living on a very tight budget then and extra money was hard to find.  What a difference now when I don’t even think about getting routine tests done.
Our little booklet “The Baby: How to care for it” was a part of the health care revolution; a Teacher’s Guide, is available in PDF format.