The stretch of Highway 97 has been completed, directing through traffic from the lakeshore (now Pelmewash Parkway) to higher levels. This is not the first or last change in route for the Kelowna to Vernon road. The road was originally completed in 1875 and was known as the Vernon to Mission road, following a high level route. This route extended from what is now Okanagan Centre Road East in Winfield to the Old Mission Road at the Oyama end. When the canal connecting Wood and Kalamalka lakes was completed in 1908, the level of Wood Lake dropped by four feet, exposing a shelf along the lakeshore. In 1910 the provincial government decided to reroute the portion from Oyama to Winfield along the lakeshore, where it remained until now, although it was widened and improved in the late 1950s. 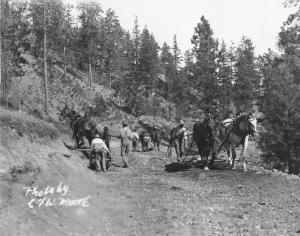