The Lake Country Museum is proud to exhibit the “Girls Day” festival, a full set of genuine Japanese dolls donated to the museum by Mr. Mitsuru (Mits) Hikichi.

During the early 1900s many Japanese families moved to the Okanagan for work. One such family was that of Mits Hikichi. Mits’ family worked at the Rainbow Ranche which was in the Oceola Rd/Okanagan Centre Road East area. Mits started school at Okanagan Centre School (now the Lake Country Museum and Archives) in 1934 and then went on to work at the Rainbow Ranche himself.

Mits’ boss was married to a lady named Eileen MacArthur who had a Japanese pen pal living in Japan. Back in the 1950s the pen pal asked Eileen if she would like some dolls and Eileen said yes, imagining she would receive a doll or two like we often see displayed here in Canada. To Eileen’s amazement, many boxes started to arrive at her house until she received the entire collection, as shown in the sixth photograph below, including the stand, cloth and book. What Eileen didn’t realize was that she had received a set of Hinaningyo dolls which are set up for an annual festival called Hina Matsuri or Girl’s Day. The dolls are set up around the end of February each year for the festival which celebrate girls in the family and prays for their health and happiness. The display is taken down on March 3rd because custom says that leaving it up for longer can ruin the girl’s chances of getting married.

Before Eileen passed away she remembered meeting Mits and asked her daughter to gift the collection to him and his wife, Marlene. Mits offered the collection to the Lake Country Museum in honour of Lake Country’s relationship with the Japanese community. The Museum is honoured to share this beautiful collection with you.

Perhaps the most incredible part of this story is, the relationship between Eileen and her Japanese pen pal that endured through the years after World War 2, despite the animosity between the two nations in the post-war years. 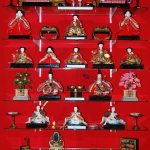 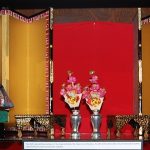 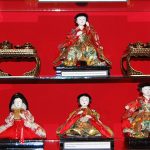 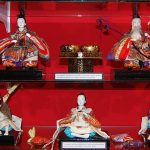 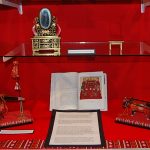 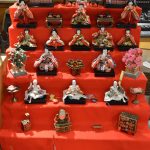 The first photograph shows the display in its entirety. In a Japanese home it would be displayed on a stepped display stage as shown in the last photograph. The order and placement of the dolls is important. In the second photograph the Emperor and Empress occupy the top shelf. As with all the other dolls, they are dressed in clothes representing the Heian period (795-1185AD).

The fourth photograph show two ministers on the fourth shelf . The Minister of the Left (on the viewer’s right) is an older man while the Minister of the Right is depicted as a young man. On the fifth shelf are shown the Emperor and Empress’s protectors. From left to right; the whiny drinker, the quarrelsome drinker and the merry drinker.

The fifth photograph shows types of furniture found in the Emperor’s palace on the sixth shelf.  the bottom of the display shows a palanquin (wheel-less carriage to transport one person, carried by four people on their shoulders) and an Ox and cart. These are traditional items found outside the Emperor’s palace. In the last photograph these items were shown on the seventh shelf.