Backward Glances: Do You Remember?

It appears to me that as we age our memories begin to perform very strangely.  We meet old friends and talk about the “old days” with amazing recall yet increasingly find ourselves standing in the basement, totally mystified as to what we went down for, or frantically looking through pockets and cupboards for the keys we’d had in hand only shortly before.

So I recently conducted my own not very scientific study into the depths of my own ability to recall ancient things while lying in bed struggling for sleep.  Wife Elaine has a different approach to the old sleep-inducing “counting sheep”. She tries to go through the alphabet with a country and city for each letter. Apparently she seldom has to deal with the letter “X” before sleep comes. So my recent variation of the theme was to  mentally travel “our” road from my youth, then known as the “Top Road” and now OK Centre Rd. East, from end  to end in an attempt to recall who lived there in the mid-50s.  So if you’re not an “old timer” around here, you may want to read elsewhere, and if you are an old timer, please feel free to let me know everyone I miss or get wrong. This is, after all, done from memory, not from research nor consultation.  My rules.

I let my memory start at the Oceola and proceeded south on the west side of the road. At that time the first house was Cooks, then Krampitz (?), Walter Brodie, our house, Ike and Lillian Hillaby, and my Aunt Marion and Grandma Gibbons at the corner of Davidson.  After Pollard’s orchard was Reuben and Helen Krebs, Nels and May Arnold, Herb and Vivian Stone, Shishido’s, Murray and Agnes Sherritt.  The home past Seaton was Brodie’s (sold to Hoogers then Greers), Gilbert and Jane Arnold, Urquhart’s, I’m blank on the next one, and down to Arnold’s Store at the Camp intersection. Next door were Art and Ethel Arnold, Ross and Lola McDonagh, the Rinas family, then, I think Draschenbergs.  At the top of the Gully were Wilf and Gert Gelhorn, then Mr. MacDonagh, with Gordon and Jesse Shaw tucked up well above the road.  I don’t recall anyone else residing on the West side until you hit the highway.

On the East side, heading North, the first home I recall was the Smith’s, then orchard (later Ray and Mona Hotitzki’s) until you got to Ralph and Madge Berry’s. At the top of the Gully was then Derek ………., on the other side of Berry were John and Ruby Green, maybe one of the Holitzki’s (?), then Lonnie and Evie Stowe, Westenberger’s and Les and Fern Chato. There was another family in there but I can’t remember their name at this moment. Then it was Fyfe and Margaret Sommerville with the Holitzki’s next to the present firehall. Same blank with the next houses before Alan and Edith Gibbons (later Cliff and Lena Gunn’s), the Edmonds, and the Jack Seaton’s. Next, I think, was Mrs. Leigh’s with Ken and Mildred Jardine in the back. I think it was all orchard then until you hit the beautiful property of the Koenig’s, now the Catholic Church. Then came “Pop” Dobslaff’s, Danie Miller, Charlie and Irene Hall, the Fred Hall’s, Mr. Cook senior, then a lovely lady whose name escapes me, but she made wonderful popcorn balls for Hallowe’en. Next were the Pow’s, then my grannie and grandpa Friesen, Earl and Lily Sherritt (later Budgen’s), before crossing Robbie’s Hill. The Jack Klassens were  on the old Robinson property, Chisholms then Davidson’s. Across from our house were the Canamera’s (later Caldow’s), then orchard down to Mende’s, then Frank Baxter and another one of the Cooks (whose house burned down in the early 1950s. And that was it. 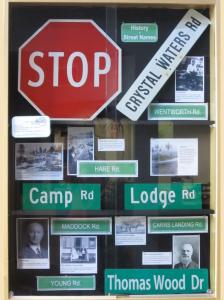 In January 2012 the LC Museum display in the lobby of the District of Lake Country Municipal Office featured the history of road names in Lake Country (see photo below). This display was very ably created by the author’s brother, Glen Gibbons, and Glen’s wife, Karen.