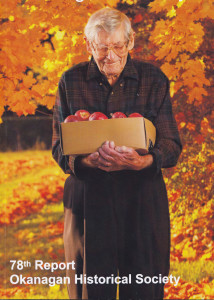 That very special Christmas stocking stuffer, the Okanagan Historical Society’s publication, Okanagan History, is now available from Bob Hayes (250-763-8859), Life Member of the OHS and Director of the Lake Country Heritage and Cultural Society. In the article following, Hayes previews this valuable report:
Since its founding on September 4, 1925, the Okanagan Historical Society (OHS) has worked long and hard to preserve, in writing, the history of the Okanagan, Similkameen, and Shuswap valleys.
During its existence, the OHS has produced 78 reports, the latest of which has recently been released to the public. As with its predecessors, the 78th Report is a wonderful source of local history, containing biographies as well as stories of families, ethnic groups, institutions and buildings, along with local histories.
One of the highlights of the report is an article entitled “Memories of Kelowna’s Chinatown”, by Tun Wong. This detailed account provides insight into life in Kelowna’s no-longer-existing Chinatown, including the people, social life, commercial enterprises, and institutions that made Chinatown such an important part of Kelowna’s history. Several photographs and a map showing the location of businesses and residences round out the article.
Okanagan College, a very important part of our history, celebrated its 50th birthday this past year and to commemorate the occasion local author and historian Sharron Simspon wrote an excellent article entitled “Okanagan College — 50 Years Later.” It recounts the birth and growth of this major educational facility. The early years offered many challenges but, because of the dedication of a determined group of people, Okanagan College became a reality with several campuses up and down the Valley.
This past year also saw the end of freight railway service to Kelowna. Coincidentally, Ian Pooley wrote a detailed account of the history of the CNR in the Okanagan. Well researched and referenced, “Doodlbugs, Sleeping Cars, and Social Class Distinction: The Canadian National RAilway’s Interwar Passenger Service to the Okanagan” is a must-read for all railway enthusiasts.
Biographies of several First Nations people, including Mourning Dove, Edna Rose Gregoire and Yvonne Ceclia Arnouse, make interesting reading, as do tributes to four well-known residents: Mike Favali, Albert Rampone, Keith Frederic Tutt, and James H. Hayes. All of these people contributed to their communities and their lives have been chronicled in the report.
Central School celebrated its centennial in 2014 and an article about “The Grand Dame of Richter Street” is found in a section called Heritage Buildings, which includes stories and photographs of eight heritage buildings found in the Southern Interior. Anyone with a connection to Central School, or who has a love of heritage buildings, will find lots in the report.
The 78th OHS Report, Okanagan History, is available from Bob Hayes (250-763-8859), Mosaic Books in Kelowna and at the Okanagan Heritage Museum on Queensway Avenue in Kelowna, BC. It will provide hours of good reading.
The variety and quality of the artilces in the 78th OHS Report attest to the Okanagan Historical Society’s ongoing mission to preserve our history and make it available to the public.
Source: Robert Michael “Bob” Hayes is a life-long resident of Kelowna and a descendant of the pioneer Whelan and Clement families (of Ellison and Lake Country). Hayes is a Life Member of the OHS and the Kelowna Branch of the OHS. He is also a Director of the Lake Country Heritage and Cultural Society.
This article was previously printing in the Kelowna Daily Courier on October 27, 2014.
Note: The cover of Okanagan History, features Ronald Hudson Turner. His tribute, by daughter Janice Turner, appears on pages 188-191 of the 78th Report.