The Era when Okanagan Centre sent passengers, mail and fruit by the Lake

Back at the beginning of the 20th century, the farmers and ranchers in the Winfield-Ellison area faced a dilemma – south of Wood Lake the only way to move hay and fruit was by wagon road. When Price Ellison, the Vernon MP, had to ship hay from his ranch near Duck Lake, he used the road that led over the low hills separating Okanagan Lake from present-day Winfield.  He unloaded the hay at the government wharf at the Rainbow Ranche, close by Okanagan Centre.

The wharf’s importance increased when the Okanagan Land Company began its orchard development at Okanagan Centre shortly before World War I.  Fruit was shipped out on the CPR sternwheelers, the Aberdeen, Okanagan, and Sicamous. By the end of the war, the sternwheelers were no longer adequate to handle the increased volumes of fruit and in 1919, the CPR built a railway barge transfer slip at the Okanagan Centre townsite. This allowed refrigerator cars at the two new packinghouses to be loaded directly on to railway barges, and eliminated the need to manhandle boxes of apples on to the cargo decks of the sternwheelers.

The CPR continued to give full service to Okanagan Centre well into the Great Depression, but in January 1935 the company began a passenger train service to Kelowna, using the CNR tracks south of Vernon to make the connection. The Sicamous, no longer needed, was withdrawn as a passenger boat, and thus Okanagan Centre was deprived of the sternwheeler’s daily mail service; from that point on mail was delivered by truck.  Although CPR tugs and barges continued to serve the packing house, Okanagan Centre’s days as a busy general transfer point on Okanagan Lake were over.

Over the years, barge slips and docks on Okanagan Lake had their share of accidents; unloading and loading a railway barge with a winch and cable was a delicate operation. Shortly after the CPR completed it, the new barge slip at Okanagan Centre had its first mishap:  a box car loaded with fruit rolled off the end of the slip and landed in Okanagan Lake. Newspaper accounts of the accident don’t explain how it happened; likely someone forgot to set the handbrake!

The Okanagan Centre barge slip was the scene of a more serious accident in the winter of 1929. The February 14 Kelowna Courier reported: “Three cars of apples are resting on the bottom of Okanagan Lake, partially submerged, at Okanagan Centre, as the result of the barge sinking when loaded on Tuesday.” 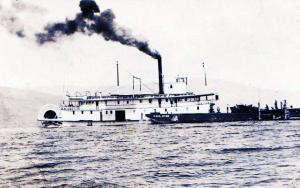 The Vernon News was a bit more explicit: “Early Tuesday morning a barge on which was loaded three cars of apples partially sank close to the dock at Okanagan Centre. The tug Kelowna was lashed to the barge, which fortunately did not go completely over.” Although the newspaper accounts don’t elaborate, it is possible the cars were loaded without ensuring the weight was evenly distributed. Whatever the contributing factors – an open hatch or a damaged hull, it’s certain that the barge took on water. A photo shows it poking out of the winter ice, the railway cars still on board.

Shannon Jorgenson at the Lake Country Museum has unearthed a second photo, fascinating in its detail, that shows the barge after the mishap. Partially refloated but still listing badly, it has been moored alongside the Okanagan Centre barge slip. Because the crew of the CPR tug have been unable to properly dock it at the slip, the railway cars have not been transferred to the tracks. Instead, an antlike party of men is unloading the cars by hand, laboriously transferring boxes of half frozen apples one by one over the ice and snow to a stack on the beach. Luckily for future historians, someone had a camera!

Heritage Week BC is an annual celebration of the province’s unique natural and cultural heritage and takes place from February 17th to 22nd. This year’s theme Heritage Afloat! recognizes the importance of our waterways in early transportation. The Okanagan is blessed with an abundance of water. Most of our towns and cities have been built next to lakes and rivers — and where we built roads and railways on land, they linked waterways to create a complete transportation network.

To celebrate Heritage Week, the Lake Country Museum is hosting guided tours of the Museum on Monday, Wednesday, or Saturday next week, from 1pm to 4pm. Special to Heritage Week is the opening of the new exhibit case, Goldfinger: Charles Sydney Goldman on 7pm, Wednesday, February 19th with an introduction and talk by Museum Curator, Dan Bruce.  Admission is by donation. For more information, please contact the Museum at 250-766-0111 or visit our website at www.lakecountrymuseum.com.

To view the video Heritage Afloat! by the Lake Country Museum & Archives, link to the LCMA YouTube channel.