“Quiet, bold, impulsive and curious”. All of these have been used to describe the bird recently voted Canada’s pick for National Bird. Voting began in January 2015 and was conducted by Canadian Geographic. Tens of thousands of votes were cast and eventually, in November 2016, the result was made public. A bird that for 200 years was officially known as the Canada Jay until renamed Gray Jay in 1957 by the official North American bird naming body, the AOU (American Ornithological Union), had risen to the top and was our number one pick. Gray Jay or Canada Jay – this is OUR bird. 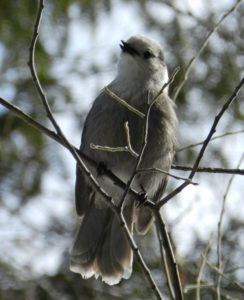 Gray Jays are year-round residents of every province and territory. They do not migrate southwards but do sometimes move from upper elevations into lower during the winter. They prefer the boreal and mountain forests which blanket nearly 2/3 of our country, only a small percentage crossing into Alaska and the western mountains of the US. They have never been recorded outside of North America. Among the best places to see them locally are upper Beaver Lake Road or Oyama Lake Road. 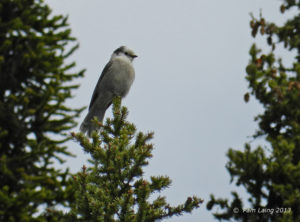 Gray Jays are amazingly hardy. They nest in February, when the forests are still thick with snow. They have even been recorded as incubating eggs in snowstorms and temperatures as low as -30C! Members of the corvid family, related to crows, ravens and the Blue Jay, they are among the most intelligent of all birds. Their brain to body ratio is almost the same as that of humans. They cache food, mainly insects or small fruits, in many hiding places throughout their territories and are amazingly adept at recalling exactly where. 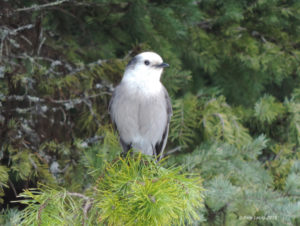 Gray Jays have always held importance for Canada’s First Nations. In Cree they are called “Wisakedjak” which has been Anglicized to our common nickname for the species, Whiskey Jack. In Cree teachings the bird is often regarded as a ‘shape-shifter’, a benevolent trickster, teacher and messenger of the forest. To many western First Nations, the appearance of a Gray Jay in the morning is a good omen.

As well as Whiskey Jack the Gray Jay has also been dubbed Camp Robber. Many of us have experienced their thieving presence at picnic tables in the woods. They are frequent visitors to lumber or mining camps and research stations, showing no fear of humans and often behaving in a very tame, curious and confiding manner, which is endearing.

As Canadian Geographic scientists and others have said, “We cannot think of a more Canadian bird.”