On Saturday May 17th friends, family and neighbours will gather to wish Anne Land a very happy 100th birthday. One of Lake Country’s most prominent citizens was born on May 20th, 1914. 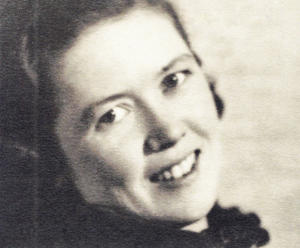 Anne is pretty unique because she has essentially lived her life in one community, Okanagan Centre. This must make her our oldest living connection with our past. Her parents, Jim and Jessie Goldie, owned and operated the Rainbow Ranch, site of one of our few remaining historic homes. For those who aren’t aware of its location, it is on the lake directly below the intersection of the Rainbow Hill and Carrs Landing Road. Anne was their first child, followed by sister Nancy and brother Bob. The Rainbow Ranch was a large operation and one of the earlier hired hands was my dad who arrived here in 1929. He had come to the area as a teenager and lived in a tent on the property for several years. He always remembered that Jim and Jessie Goldie treated him as much like parents as employers.

Relatively few of us can aspire to reach the century mark in our lives, let alone to do so with Anne’s health and vigour. She continues to live very independently in her Okanagan Centre home where she and husband Sid raised their three children. From my perspective her routines have changed little over the years and she has a busier social life than many people a fraction of her age. Whenever there is a significant social event such as CentrePiece or the OK Centre Hall’s Christmas and Progressive dinners, Anne will be there. Her children Ian, Elizabeth and Nancy are very caring of their mom but none live nearby so she has a network of friends to assist with things like mobility.

While she no longer drives it wasn’t that long ago that she retired from the driver’s seat. One day when she was in her nineties, she said: “Richard, I’m getting rid of my old car”. Thankfully I didn’t blurt out: “Oh, it’s so hard to give up driving isn’t it?” as she then went on to say: “Mickey found me a new car that will be much better for me”. Today it’s often her good friend and neighbour Lynn, “Mickey’s” wife Patti or niece Tessa who can be counted on to get her to her appointments. 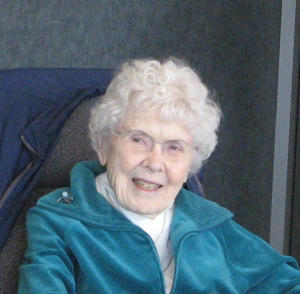 As the “nominating committee” for the Lake Country Heritage & Cultural Society I called Anne recently just prior to our AGM. She is a long time director and her term was ending. She graciously accepted my nomination for re-election and chuckled when I told her we’d have to do it all again in a further three years time. I’m looking forward to making that phone call in 2017. Anne seldom misses meetings and provides our Board with so much knowledge and historical perspective. She’s also pretty quick to tell us if she disagrees with our direction. Even today she can go back to the early days and tell you who lived in virtually every house in the Centre and something of their family and circumstances.

Needless to say this lady has seen unprecedented change in her lifetime. Very few of the conveniences enjoyed by our current society existed in her youth. Imagine having lived through the arrival of an automobile in every driveway, telephones and instant communication, and more recently technology inconceivable to even the most vivid imagination of those earlier times. In that era much of the transportation in the Valley was by water and she well recalls the early paddle wheelers such as the SS Sicamous. She can even tell you about rowing her small boat across the lake to make a social call.

In those days Okanagan Centre was the prominent community in what we now call Lake Country. Anne clearly remembers the hotels, laundry, general store and fuel pumps that were the hub of the village. At the north end was the cannery and in the “middle of town”, the Winoka Packing House. The packing house with the still standing cold storage plant across the street was the largest employer providing seasonal employment for many locals, particularly women.

Now the only remaining reminders of this rich history are our Community Hall and the Museum, which had been the school house until it closed in the early 1980s. Today the main room of the Museum is named the “Anne Land Room” and I think she is pleased by that. At one time she served as the librarian in that little school house. 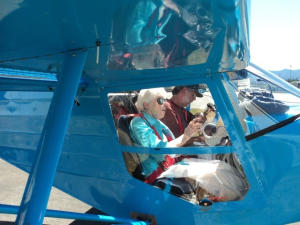 I very much enjoy my frequent chats with Anne. Her eyes can positively twinkle and her great sense of humour remains. While she tends to take life a little easier these days she is always up for a bit of fun. In one of the photos attached you’ll see Anne as a lovely young woman while the other shows her as a passenger in an airplane just a few years ago. It might be noted that the aircraft was being flown by her nephew who was well into his seventies. If I recall the story correctly he co-built the plane with his dad, Anne’s younger brother. That younger brother was well into his nineties and still held a valid license to fly. There were obviously good genes in that family.

There is so much more that could be said of this exceptional lady and her long and full life. More of the family story can be found on our Museum website. Suffice it to say that few of us today will be able to look back at a life that has encompassed so much change. One thing, however, that has never changed for Anne Land is her love of our community of Okanagan Centre.

A Community Celebration honouring Anne on her special birthday will be held at the Okanagan Centre Hall from 1 p.m. to 4 p.m. on Saturday, May 17, 2014.

More information about Anne Land “Reaching the Century Mark” can be found in The View in Lake Country, Friday, May 9, 2014, p. 6.