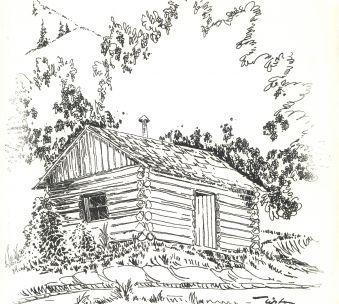 The Halfway House, a one room cabin with an attached lean-to, was built by Frank Bouvette as a stage coach depot on the lakeshore of Long (Kalamalka) Lake. Built in 1903, it operated for at least a decade feeding and servicing the passengers and teams that traveled from Vernon to the Mission and Kelowna. The Halfway House, located at Milepost 11 from Vernon wasn’t half way in distance from Vernon to Kelowna, but this distance was considered half of the effort for the horses, considering that they had to climb up and over the Commonage hills coming out of Vernon.

The depot was owned and operated briefly by Matt Howard, then by W.R. Powley who operated it from 1904 until about 1913 when the stage owner relocated the depot to a location near Robinson Road west of Woodsdale Road. The stage line was operated successively by Walter Pritchard, Michael Healy, Sam Munson, and William Scott (beginning circa 1907), and Jack Wyatt (1916).

Powley’s recollections of the Halfway House operation are descriptive:

“Pritchard [the stage operator] always kept three horses at the Half Way House, a team for changing and an extra horse in case of trouble, such as one going lame. One never knew till the stage arrived how many mouths there would be to feed. The table must be set and food cooked ready to serve. The horses must be fed ahead, cleaned, and harnessed so that there would be no delay when the stage arrived. Pritchard’s stage at that time was a heavy Democrat with three seats, seating six comfortably. The Stage went south to Mission and Kelowna on Monday, returning on Tuesday and so on through the week, stopping to change horses and “dinner” at the Half Way House. The tableware consisted of blue-gray enamel plates, steel knives and forks, plain white cups, and saucers. The meal consisted nearly always of roast beef, baked potatoes, pudding and fruit, bread and butter and tea …. The price of this meal at that time was twenty five cents.”