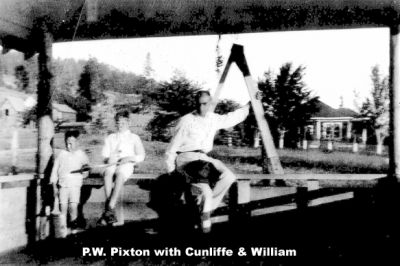 Pixton Road was named for the Pixton family probably sometime after 1910.

P.W., as Percy Walter Pixton was known, was from a wealthy family in Liverpool. In his twenties, he and his brother Eric travelled to Argentina where they worked on a sheep ranch. Unfortunately for P.W., the adventure led to malaria from which P.W. never fully recovered. When he was well enough to travel, he returned to England.

Following a brief stay in his home country, P.W. journeyed to the United States where he met and married his auburn haired Ella. Searching for the best climate for P.W.’s health, they lived briefly in Mexico before travelling north to Canada.

The family lived and farmed at the end of Pow Road until their move to a large house above Pixton Road. P.W. planted an orchard, became an insurance agent for the Royal Insurance Company in Vancouver, and he and Ella became involved in community activities. They had a second son, William Paulsel. Paulsel was a family name on his mother’s side.

In his late teens Cunliff moved to California where he became involved in the fruit industry, married and raised a family. Bill married, too, but remained in the Okanagan community.

Their first house burned to the ground. Rather than move from the area, they relocated a little further north to the lakeshore at the end of the road where they built a new home.

P.W. died in Kelowna in 1963 at 86 years of age. Ella died six years later at 92. Cunliffe died in Kern Country at the southern end of the San Joaquin Valley in l971. Bill died a few years later in Kelowna.