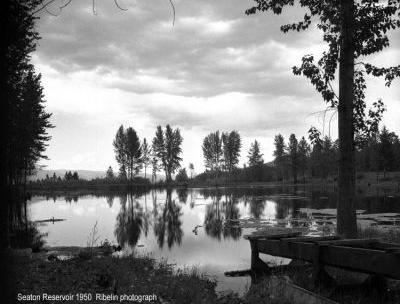 The key to growing agricultural crops in the Okanagan Valley was, and is, water. Without it, the land reverts back to its natural state of bunch grass and pine trees.

Government water policy was first formed back in the placer gold mining days of the 1850s and was changed and added to over the years as necessitated by conditions. As agricultural settlement increased, in fact boomed after 1890, so did the need for irrigation water in the Interior Dry Belt of which the Okanagan was part. Since the amount of water was limited, competition for it was intense, and, as before, the first to apply got the first water right from that source.

With a poor, or non-existent, infrastructure, the British Columbia Government did not really have control of the water as they lacked an agency devoted to water rights. This changed in 1909 when the revised Water Act provided for a Water Rights Branch….

At first agricultural water rights were generally taken out by individuals. This changed in the Okanagan as development companies came on the scene at the turn of the century and opened up blocks of land for settlement. In order to sell the lands, these companies had to provide irrigation water and so applied for water rights. Usually these rights were turned over to water companies composed of the land purchasers thus giving those users control of their water.

There was a reservoir near the top of the ridge on Camp Road just west of the entrance to Seaton Park. It is overgrown now. An old section of wooden irrigation pipe leading from this reservoir can still be seen sticking out of the bank above Tyndall Road near Camp Road.