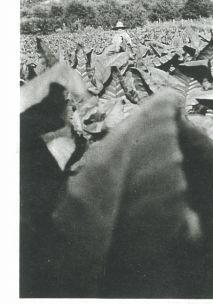 Edward Hare was born in Somerset, England, and arrived in Vernon around 1907. Later he went up north to Fort Fraser where he was involved in building bridges on the Grand Trunk Pacific at a time when Canada was being opened up from East to West.

Hare stayed in the North for about eight years, before returning to the Okanagan in 1916, at which time he joined the Sixth Field Company, Canadian Engineers.

One year later Edward Hare was transferred to the First Army Troop Company where he saw action for the whole of World War 1. After his war service ended in 1921 Edward returned to the Okanagan at which time he purchased an orchard in Okanagan Centre.

It was here, in the Okanagan, that Hare’s two sisters joined him, and he lived with them until 1928. In 1928 Edward married his wife Susan, whom he met at the Okanagan Valley Land Company where she worked in the office. They had one daughter, Karleen.

Edward Hare was not only involved in the orchard business, but is also credited with having built many of the houses in Okanagan Centre, along with his partner, James Alfred Gleed. He also did some building business in the Okanagan Mission area. In the summer of 1937 the Hares spent their summer in Kelowna, at which time Edward Hare was appointed Supervisor for architects McCarter & Nairne, who were responsible for the building of the Kelowna post office.

Both Edward and Susan Hare were very active in the Okanagan Centre community and in the United Church where Susan was the organist. She was also involved in the tennis club, an avid badminton player, and a prominent member of the Women’s Institute.

The Hares moved to Kelowna in 1948, where Edward “Teddy” again worked for McCarter & Nairne in a supervisory capacity overseeing the building of the Memorial Arena, City Hall, the new addition to the Kelowna General Hospital, along with the building of the new Kelowna High School and other schools in School District 23.

It was in 1953 that, due to ill health, Edward Hare decided to retire and to sell his orchard ranch in Okanagan Centre; he sold it to S. Luknowsky. The Hares remained active in Kelowna in particular with the Red Cross.

Edward Douglas Hare passed away in 1963 at the age of 80. He was laid to rest in the Kelowna Cemetery. After Edward’s death Susan was still active in the community. In 1978 she took up residence at Pleasant Meadows where she enjoyed playing the piano, looking after the flowers in the gardens, and taking part in an occasional game of croquet.

Susan Margaret Hare passed away on January 18, 1981, at the age of 82 years; she was laid to rest beside her husband in Kelowna.

Source: The Kelowna Daily Courier; The Calendar; and the Lake Country Museum archives.