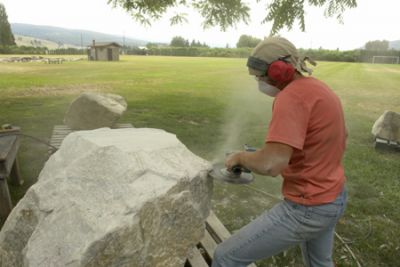 Funky Pear by Ede Axelson, is one of four marble sculptures to be commissioned by the Public Art Commission to commemorate the tenth anniversary of the incorporation of Lake Country in 1995. Problems with transporting the marble from the quarry to Swalwell Park where the sculptures were carved, delayed the work until the summer of 2006.

Ede Axelson, a local artist, has made other sculptures for Lake Country (see Town Clock, Phases of Time and the Dancing Goose). Axelson carved her sculpture in accordance with the theme of celebrating the tree fruit industry. One of the workers at the local packinghouse told her that they sometimes got pears that looked like her sculpture but they threw them away! She has called the work Funky Pear because it looks like a pear ‘with attitude’. The metal stem and leaf was fixed in place when the sculpture was placed in the south end of Creekside Park. Funky Pear currently resides in Swalwell Park.