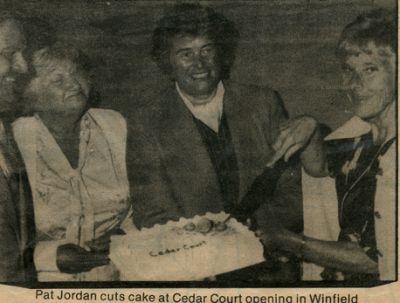 The Winfield Seniors’ Housing Complex was renamed Cedar Court by the first residents. The B.C. Housing Management Commission (B.C.H.M.C) and the Canadian Mortgages and Housing Corporation (C.M.H.C.) financed it. The C.M.H.C. provided their part of the financing at 2.5% in an effort to keep such housing costs affordable.

Residents moved into the 30 units at Cedar Court December 1, 1981. The official opening was June 6, 1982. Tom Proudlock of the B.C.H.M.C. conducted the opening ceremonies. The official ribbon cutting was done by James R. Chabot, B.C.’s Minister of Lands, Parks and Housing, the Honourable Pat Jordan, Local MLA and Minister of Tourism and Lawrence T. Wall, Manager of C.M.H.C. Other dignitaries present included Alderman Fred Macklin and Alderman Ben Lee of the City of Kelowna, Jean Elliot, president of the Ratepayers’ Association and Ross McDonagh, deputy chief of the Winfield Volunteer Fire Brigade.

The first caretakers were Ted and Verna Snell and from 1982 until 1995. The residents kept detailed notes regarding the residents’ lives, people leaving, newcomers and deaths. There are accounts of social gatherings and birthday celebrations. There are also albums of pictures taken during this time. All of these are now kept at Lake Country Museum.