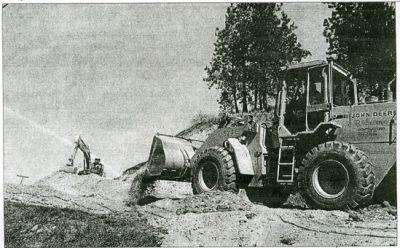 Lawrence Enterprises began a $600,000 project to realign, smooth out, straighten and generally fix up the stretch of Camp Road from Okanagan Lake to Hare Road in Okanagan Centre.

Camp Road was moved east into the hillside below Hare Road, which meant that pieces of four properties had to be purchased.

A retaining wall was constructed using technology new to this area. A black ‘geofabric’ installed by the manufacturer, forms the basis of the retaining wall that soars six metres (20 feet) above the east side of Camp Road. Traditional techniques of cutting into the hillside and holding back the earth would use either long, sloping cutbanks (requiring the purchase of entire lots to accommodate 200-foot-long slopes), or expensive interlocking concrete blocks. The face of the retaining wall uses wire baskets to hold the soil in place. It was then hydroseeded.

The other major component of the project was the Camp Road and Okanagan Centre Road intersection. What was a sharply angled intersection has been raised about one metre (three feet) and straightened out to form a 90 degree angle.