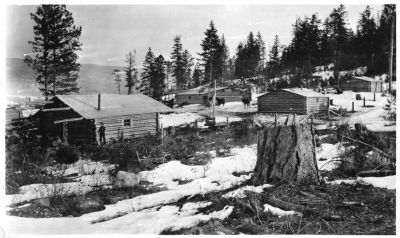 Camp Road runs from the Winfield Fire Hall on Okanagan Road East, to Okanagan Centre. It was named after the camps where the Japanese community agricultural workers lived.

Many Japanese pioneers began working in the Okanagan Valley on the Coldstream Ranch and between 1910 and 1920, some migrated to Okanagan Centre and Winfield and worked for the Okanagan Valley Land Company. This Company entered into a contract with Denbei Kobayashi, who was to be in charge of planting fruit trees on the Rainbow Ranche. Mr. Kobayashi hired a number of Japanese labourers to assist him in the new orchard that was managed by one of the owners, Mr. James Goldie.

Socially and culturally, the Japanese community was generally self-contained, as it was the practice of the time to exclude many nationalities (non-English and non-western) from formal clubs and activities. Most of the Japanese initially lived in one of two camps — the Rainbow Ranche camp and the camp on Seaton Road. Later, some families bought property, built homes and ran their own orchards or farms.

Eventually many of the pioneers of the Lake Country Japanese community returned home, usually after the death of a spouse or retirement from the business world. However, many of their children remained and came to play a significant part in the history here as their parents had done.