“In the final months of the Second World War Canadian forces were given the important and deadly task of liberating the Netherlands from Nazi occupation. From September 1944 to April 1945, the First Canadian Army fought German forces … and then cleared northern and western Netherlands of Germans, allowing food and other relief to reach millions of desperate people.”1

Liberation Day in The Netherlands, May 5th2, marks the end of the occupation of Nazi Germany during World War II. The following letter, written by an Army Private to his sister in the Okanagan during the days following liberation, was penned by Albert Rosenholm who was on active duty in Holland in May 1945. 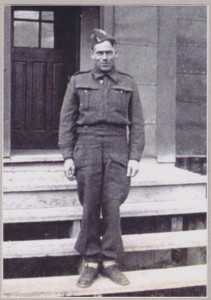 Got your letter some time ago and tonight it Saturday and can’t go out so will write a few letter[s]. I’m all alone in as the rest of the boys in the room are on guard and won’t be back until tomorrow some time.

I’m sure glad it[‘s] all over as their [sic] will be times that one will remember if he got hundred years old. Anyway the last day before it was over that was a grim show; if it would of been over a few hours sooner it would of mend [sic] a few more guys home but I guess I’m lucky to be all in one piece.

I did not write much when we were going ahead all the time as I did not know how long one was going to be there but now I guess I’ll have more time to write as I don’t think I’ll be home for a while yet as they are sending the ones home with the “longest service”. But the boys in the lines did not last long …”3

Albert Rosenholm was a farm boy who was just emerging from a horrific battle as he wrote this letter. When he returned home he seldom mentioned his wartime experiences.

1 Liberation of The Netherlands. Canadian Encyclopedia.