The Vernon News, May 1964. Wood Lake Water Company Dies. A Demise to be regretted

“OYAMA (Correspondent) — The Wood Lake Water Company has held its last meeting in the Oyama Memorial Hall. Twenty-two growers at this meeting dissolved the old company and formed the new Wood Lake Improvement District. Trustees of the new district were Thomas Towgood for three years; Charles Pothecary for two years; James Janz for two years; Douglas Elliot for one year and Bernard Gray for one year. Arthur Gray was named secretary-manager for the trustees.

Another link with the past was severed with the passing on May 31, 1964, of the Wood Lake Water Co. Ltd., of Oyama.

It was on June 8, 1910 that five men, owners of land in the subdivision at Oyama marketed by the Wood Lake Fruit Lands Co. met to form a limited liability company, with the purpose of acquiring and distributing water through the irrigation system recently built by the land company. Why a limited liability company was formed rather than a district or a co-operative, there is no record, since there was never any thought of making a profit. Apparently they “builded better than they knew” for that company has a most successful life of 54 years and its demise was regretted by all.

There were difficulties in plenty throughout, but these were successfully overcome due in part, to the large number of public minded citizens who served as directors, but in large measure also to the spirit of co-operation and pride in the Company shared by most of the shareholders.

Difficulties started in 1914 when all the unattached young men and some attached ones also, departed for overseas to answer the call. Could those few remaining keep the system operating? Well, somehow they did. Many of those who left did not return but their places were taken, as also a large part of a new subdivision by an influx of veterans following the peace. (Some of the old-timers thought the place was getting overcrowded, and threatened to leave for pastures new, but they stayed.

However, this influx of new people had an effect on the company. Water began to get short and the old free and easy ways where one helped oneself to water as and when it was needed, could no longer be tolerated. There must be a water bailiff and all water must be measured. There were heated protests, but bailiff and measurement had come to stay. A further case of the shortage was the fact that the company in its free and easy days, had agreed to supply the Long Lake Irrigation Co. with water, to which Long Lake [Kalamalka] hadJ. a partial right, through ownership of the Lumby record, a limited but very old claim.

Supply became gradually more scarce as the “thirties” drew near and culminated in 1930 and 1931 when 10 and 11 inches per acre was delivered instead of the required 30.

On May 4, 1931, an agreement was signed between the Wood Lake and Long Lake irrigation companies, whereby the latter agreed to abandon its recorded rights for the sum of $5,000, which sum represented the cost of installing pumps in Wood Lake. By a strange coincidence, that sum was standing to the credit of the Wood Lake company bank account. Some people remarked on both sides on the extraordinary coincidence but there was general agreement that the deal was a good one for both parties.

J. F. Stephen and W. Hayward signed the agreement for Wood Lake, while for the O.I.D. as it now became, Miss Lloyd and W. S. Atkinson did the honors.

It was about this time too that the directors were obliged to inform the users that 20,000 feet of main flume required replacement, or would require it within the next ten years. There was no question of borrowing, it was the “thirties” remember, but the flume was our life line; water rates were raised to $5.50 per acre and shareholders worked for 25 cents an hour and in 10 years, there is a gleaming new flume — metal lined throughout. Material prices were correspondingly low at the time, we had lumber deliveries at the site for $18 per thousand; but we were proud of the job we had done, and some believed the water rates would go down.

They were mistaken, the rise from that time on was steady but continuous. W. Hayward, who had piloted the company from the time of his return from the war in 1918, retired shortly after the rebuilding of main flume was accomplished and many of those who had helped direct the company were no longer with us. Their places were filled by the second influx of veterans subsequent to 1954. Some were sons of the pioneers, others newcomers, but all seemed united in the support of the water company.

Now, once again, the spectre of the main flume replacement appears imminent. But circumstances are different. Material costs are sky-high and still rising, labor also, engineering would cost more than did the replacement of the entire flume in the thirties, and replacement by the company would be capital expenditure and as such, subject to income tax at the rate of 21 per cent.

This was the deciding factor in the closure of Wood Lake Water Company.”

Note: Oyama resident Arnold Trewhitt was the last Director and Bailiff of the Wood Lake Water Company. In a previous blog post, Irrigation is King, Arnold is featured in a video where he discusses the water systems of old. To view this video, go to YouTube at https://www.youtube.com/watch?feature=youtu.be&v=nNEGiVF9dV0&app=desktop 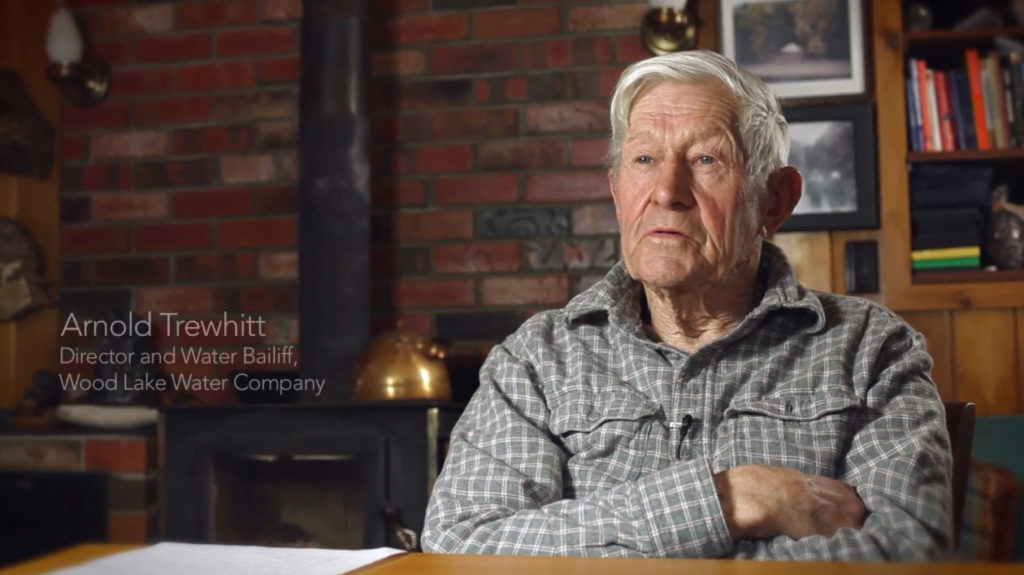