Anthony T. (Sigh) Kobayashi was the first born son of Denbei and Hiro Kobayashi. Sigh was born in a cabin, in the area now known as Seaton Park, on April 20, 1915. He was a model student, and he was well-liked by adults and children. Sigh would wait each day for the SS Sicamous to dock at the Okanagan Centre landing. He would catch a rope and anchor it to the dock for the captain; he took off the rope when the boat was to disembark. The captain gave him free travel access for this, to Kelowna and Vernon. Sigh was also the community’s event broadcaster. He would drive around with loud speakers on his wagon, announcing the community’s events. As a career, Sigh was an electrical contractor for 40 years, fixing anything electrical. He received his education from the National Radio Institute, and the Duffus Business College in Vancouver. 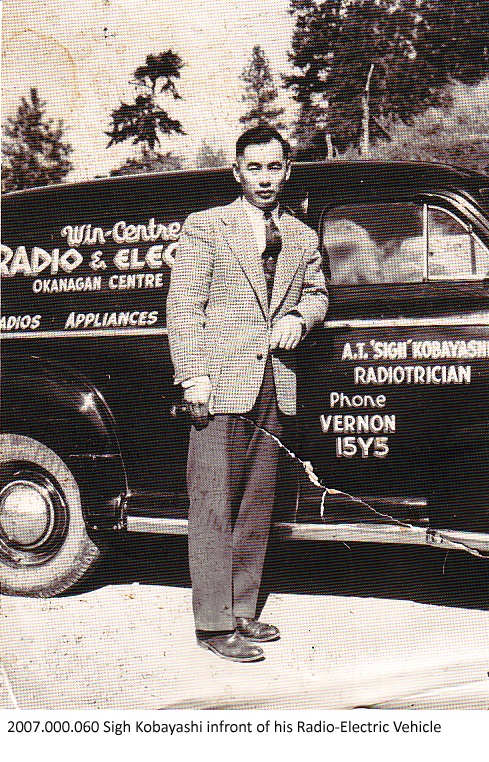 When Sigh was 15 he edited, published, and printed the community’s newspaper, the Okanagan Centre Echo, using a mimeograph. Being a prolific writer, he had over 200 pen pals across the world. Sigh was awarded several times for his dedication to the community. The provincial government of BC awarded him the Certificate of Appreciation.  He was also awarded the Sax Koyama ‘citizen of the year’ memorial award, in Lake Country. In 1988 he was awarded the Canadian Olympics Certificate of Merit for Community Service, by Prime Minister Mulroney. Along with his exemplary community service, Sigh headed a band named The Modernaires. His band played in every hall from Revelstoke to Kamloops, and they even played in most venues down to Wenatchee, Washington State.