A Post Office at Okanagan Mission was opened in 1872 and mails came from Kamloops to O’Keefe’s, a few miles north of Vernon. From there they were taken to the Mission post office by a rancher of Swan Lake named Charles Lawson, on horseback.

… Following the Lawson saddle horse delivery, mail was driven from O’Keefe’s to Mission by Alex McDonnell of the B.X district, coming over the east side of Wood’s Lake down to the Flat by Tom Wood‘s; he then angled across the Flat by the east of the creek, and from there across the Indian Reserve to the west side of Duck Lake and on to the Mission.

Until 1875 the only road was the trail, which passed through the Woods’ ranch and along the east side of the lake to the “Railroad“, as Oyama was then called, and there crossed to the west side of Long Lake. But in 1875 a Government contract was let to James Layton, who then constructed the old stage road on the west side of Wood’s Lake. Later, about 1910, this road was again changed and built along the beach of Wood’s Lake. 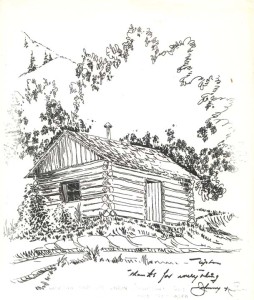 With the advent of a stage road a mail stage was driven between Kelowna and Vernon. There was a halfway house1 north of the “Railroad” at the eleven mile post, where teams were changed and driver and passengers, if any, could obtain a meal. The through trip took one day, so that mail came on alternate days and was put in heavy bags and left at the various gates passed, payment for this service being made by private arrangement with the mail carrier.

Just before the advent of motor cars, W. R. Powley, with S. Hillyard, had arrived from the Prairie in 1904. Hilliard bought the George McCauley property and W. R. Powley bought the adjoining Howard property, thereby unwittingly inheriting the Halfway House.2 Later he wished to be relieved of it and the then driver Wm. Scott arranged with Valentine — a one-time partner of N. H. Caesar of Okanagan Centre, to build a stopping place at Winfield, at the top of the hill known as Robinson’s [H]ill, where there was a good spring to supply water. The horse stage changing shortly after to motor vehicle made a half way house unnecessary.3

1 Pen and ink drawing of the Halfway House by Johnny Tipton; provided by owner Duane Thomson.

2 The halfway house property was purchased by Duane, Dorothy and Harold Thomson from the Rawsthorne family in 1965 and developed as a tourist camp called the Halfway House. It was later purchased by Sandra and David Harder and renamed Klub Kalamalka.