World War I, also known as the Great War, started on July 28, 1914 and finally dragged to a conclusion on November 11, 1918. In those four years, more than nine million men and women worldwide were killed, including more than 60,000 Canadians. Canadians, including those living in the Okanagan Valley, quickly responded to “the call”, anxious to do their part for their country. 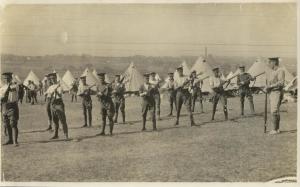 Many residents in the Okanagan Valley “signed up” and went off to Europe, “for King and Country”. A framed paper document in the Lake Country Museum lists the “Roll of Honour” for Oyama, naming those local men who served in World War I. Twenty-one names are found on this document:

Using various online records, including Canadian Attestation Papers and the Commonwealth War Graves Commission websites, the author of this article was able to glean a bit of information about most of the aforementioned names, including their places of birth, occupations, and any previous military experience. Not surprisingly, many of these young men had connections with England, often having been born in that country and coming to Canada to find employment.

Three of the names on the list of Oyama World War I enlistees are underlined: Roy. L. Geer, John P. Sadler, and Robin Brown. These three young men paid the ultimate sacrifice and their bodies lie in European graves.

Private Roy Geer, 22 years old, was killed on April 9, 1917 and he was buried in the Givenchy Road Canadian Cemetery, Neuville-St. Vast. Private Geer served with the Canadian Infantry. The son of Albert and Annie Geer, Roy had been in the first class of students in Oyama School. The Geer family, with their five younger children, moved to Vancouver after the war.

Private John Paton Sadler, 45 years old, was killed on May 5, 1917 and he was buried in the Bruay Communal Cemetery. Private Sadler served with the Canadian Infantry. The two eldest Sadler boys, Willie and John, also served overseas. The Sadler family had immigrated from Scotland in 1908 and worked for George Goulding in Oyama. John was survived by his widow, Margaret [Marie], and five sons. In November 1918 the Oyama community held a surprise party in support of the Sadler family, an evening filled with song, dance and good cheer.

Lieutenant Robin Lowis Campbell Brown, age 21 years, was killed on June 8, 1917. He was buried in Lussenthoek Military Cemetery. He was the son of Colin and Louise Campbell Brown of Vernon. Lieutenant Brown served with the Highland Light Infantry (Scotland).

We cannot begin to comprehend the sorrow that the families of these three men experienced when they learned that their loved one would never be coming back to Oyama. The entire community must have shared in their grief, while praying that no more local young men would lose their lives in the prolonged fighting.

As we approach the centennial of the start of World War I, it is important that we pause and think of the sacrifices, which so many men and women have made in the pursuit of peace and freedom. The supreme price paid by Privates Roy Geer, John Sadler and Lieutenant Brown, three men who called Oyama their home so many years ago, must not be forgotten.

To commemorate the veterans of World War I the Lake Country Heritage and Cultural Society is presenting a public lecture, The Bugle Sounds in 1914, this Sunday, June 22, 2014, at the Creekside Theatre in Lake Country (Winfield), BC. Doors open at 1 p.m., lecture begins at 1:30 p.m. Admission is by donation. The presenter is military history interpreter, Keith Boehmer.