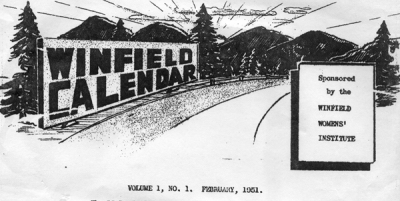 Complete set of issues from 1980 to present. Random copies to 1979 including some copies of the newsletter published by the Winfield Women’s Institute.

Volume 1 #1 was published in February 1951. In March 1973 the Winfield Women’s Institute published their last issue. The Winfield Hospital Auxiliary assumed sponsorship of the newsletter continuing to publish it monthly until they sold it in 1979.

John Gable and Jack McCarthy began publishing The Calendar every Wednesday starting with Vol. 1 #1 on October 1979.

On Saturday April 16 2005 The Calendar started publication of a free weekend digest called the Weekender. On March 8th 2007 after the retirement of Jack McCarthy The Calendar was purchased by Black Press. Steve Kidd was interim Editor for a few months following and Chris Law has been Editor since. On Dec. 22nd 2007 the last edition of the Weekender was produced as a decision of the new management.