The Fashion Fallout exhibit was designed to highlight some of the negative aspects of fashion. It was hosted at George Elliot Secondary School from September to December 2019. The exhibit was created in support of the 2019 Lake Country Art Walk  theme “Art In Fashion”. 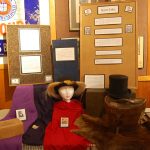 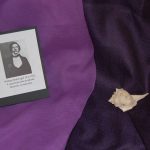 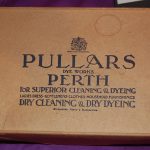 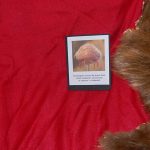 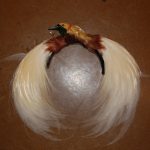 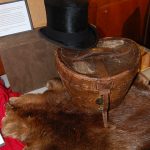 The first photograph depicts the exhibit as it was displayed in the foyer at George Elliot Secondary School.

The second photographs shows a photograph of William Perkin, aged 14. In 1856 an eighteen year old amateur chemist, William Perkin discovered how to make a light purple colour that had not been available before.  Perkin was actually trying to make a synthetic version of quinine (used in the treatment of Malaria). The experiment left a brown sludge behind in his beakers and when he cleaned the beakers with alcohol the sludge turned a beautiful fuchsia-purple colour which Perkin called mauveine – the first synthetic dye.  His chance discovery was very much appreciated in the fashion industry across Europe.   The development of the mauve dye led further into the world of chemistry, creating a whole range of colours, the aniline dyes now in common use worldwide. Sir Robert Pullar, well established in the textile business saw the potential of Perkin’s discovery, and encouraged him to proceed with his enterprise.Knighted in 1906, Sir William is remembered today as the Perkin Medal is awarded for innovations in the nylon, vitamin and medical industries.

Also shown is a Murex sea snail shell. The formal robes worn by the emperors of Rome were dyed with a substance made from the Murex sea snail, native to the Mediterranean. After a lengthy process of crushing and boiling desiccated hypobranchial glands, the creature yielded a very small quantity of a dye that ranged from purple through to a deep red. Tens of thousands of glands were needed to dye just a small swatch of fabric.The fabric shown here is dyed with a modern imitation of the colour. The shell is a specimen of the species used to create the original.

The fourth photograph displays a photograph of a Cochineal insect (Dactylopius Coccus). Red is the primary colour that has the most cultural significance in our lives; a warning, traffic signals, edible (or non-edible) fruit, warmth, and blood being some of the associations with red. Finding a good red dye was always an elusive goal of textile manufacturers, until the expertise of the natives of Mexico became known. The Aztecs and others had discovered that a vibrant and long lasting red could be made from the Dactylopius Coccus, a tiny creature that lives on cactus plants.Until aniline dyes became common, Cochineal was the best red available. Its use continues and is actually increasing among those involved with traditional handmade textiles.

The fifth photograph shows a hat ornament made with a real Bird of Paradise. Known from a very few specimens in the sixteenth century, the Birds of Paradise are almost all native to New Guinea. In the nineteenth and early twentieth centuries, the plumage of the adult male Lesser Bird of Paradise became the ultimate in fashion as ornaments for women’s hats. Between 1904 and 1908, 155,000 Bird of Paradise skins were sold in Britain alone, with even more in the U.S.A and France. The immense slaughter of the birds caused a great amount of concern for the survival of the species and eventually led to the legislated end of the trade, and also the establishment of bird preservation societies. Other species were involved, and overall, millions of birds were killed each year.
Where the Birds of Paradise were concerned, the fact that only adult males were taken, left the females and younger males – who lacked the spectacular plumage – to continue to breed. The modern day threat to the Birds of Paradise is not fashion, but habitat destruction.

The sixth photograph shows a beaver pelt top hat sitting on a traditional leather carry-case. Both items sit on a real beaver pelt. Top hats made from beaver pelts were most popular in Europe from the mid 1500s until the mid 1800s. They were both in high demand and valuable, often being passed through the generations as heirlooms.
A beaver’s coat consists of coarse brown guard hairs with a soft woolen fur underneath which were shaved from the skin (which was usually sold on to glue manufacturers or glove makers). The hatter separated the wool from the fur by twanging a long bow, similar to a violin bow, into the wool and fur. The wool would come to the top of the pile and once separated the hatter would push the fibres together by hand to form batts which were laid on top of each other with the fibres of each layer running in opposite directions to form a fabric. This fabric underwent a similar process to fabric felting to produce the final product which has a fine, soft feel to it.

Part of the exhibition was a board with  “Beaver Tales”. By the late 1600s beavers were almost extinct in Europe due to the hunting of them for their pelts. Luckily, North America was found to have a plentiful supply of beavers and the fur trade between Europe and North America via Hudson Bay began, along with the rise of the Hudson’s Bay Company, a name we are all familiar with today.

Hudson’s Bay Company actually began in LONDON, ENGLAND in May 1670, and not in Canada. HBC didn’t become a Canadian corporation until exactly 300 years later when the head office moved to Winnipeg, Manitoba.

Old superstitions said that wearing a beaver hat would make the wearer more intelligent, would restore hearing to a deaf person, or would improve the memory if a person rubbed the oil into their hair.

Urine used in the felting process of beaver wool to make hats was usually supplied by the workers themselves.

Some of the items on display were on loan from the Fintry Estate.