The 2019 feature museum exhibit comprised of historic tea tins from companies still in existence today as well as tea cups, tea pots, tea strainers, an 18th century tea caddy and a brick made from compressed tea. 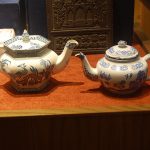 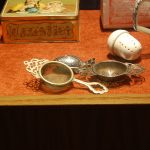 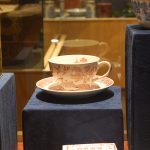 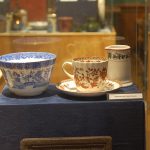 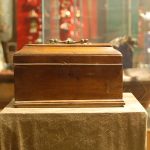 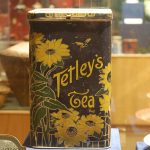 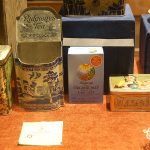 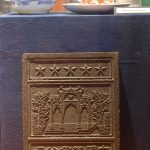 Tea was traditionally brewed in its loose-leaf form in teapots, some of which displayed the popular willow pattern.

These tea strainers at the front of the display sit on top of the cup and catch the leaves whilst allowing the brewed tea to pass through. The two other devices  hold the leaves inside and are submerged into the water to allow the tea to brew – almost like reusable tea bags!

The teacup in the third photograph is a large cup and is known as a Breakfast Teacup.

This teacup is the smaller of the two on display and is known as an Afternoon Tea cup.

This 18th century mahogany tea caddy was used to keep tea under lock and key. In the early 1700s, 100g (3.5 oz) of Twinings Gunpowder Green Tea cost the equivalent of $270 today!

Tetley Tea was founded in Yorkshire, England in 1837.

Twinings Tea was founded in London in 1706 as a tea room, which still operates as a tea shop today. Nabob was originally founded in Vancouver in 1896 as a coffee producer. Brooke Bond was founded in Lancashire, England in 1845.

Ridgway Tea was founded in London in 1836, and in 1886 received a request to produce a tea for Queen Victoria’s personal use. Mazawatee was founded in England, 1887. Overwaitea was established in BC in 1915 as a grocery store. One of the store’s sales gimmicks was to sell 18 ounces of loose-leaf tea for the price of 16 ounces. The store became known colloquially as “the overweight tea store”. When the owner opened his second store he called it Overwaitea.

Probably the most unusual item on display is the compressed tea brick. Tea leaves were compressed into bricks for transport across the Himalayas from China to market in Tibet and Nepal.
During the early 20th century tea bricks were being carried by men who would walk about 10km a day on terrible roads with an average of 136kg/300lb of tea bricks on their backs.

The exhibit was developed in partnership with The Fintry Estate.