John Wesley Arnold was one of Lake Country’s early pioneers. He was born in Belleville, Ontario in 1871 and married Lucinda ‘Cindy’ Yott in New York, where they had met while working at a hospital. The young family moved west, farming in Saskatchewan before settling in Winfield. John arrived in 1910 or 1911 and obtained work building new irrigation flumes and he worked on building a house for his family during the evening. Cindy, with their two young sons, Nelson age seven and Arthur age three, arrived in 1913. The Arnolds worked hard, clearing their land along Okanagan Centre Road East and planting berries, melons, and mushrooms; later, these crops were replaced by orchards. Cindy opened one of Winfield’s early stores at the corner of Camp Road and Okanagan Centre Road East.

Nelson founded Arnold & Sons Trucking, later G & N Arnold Ltd, which operated in Lake Country for 57 years. They hauled apples and other fruit from the packinghouses to the Okanagan Centre Wharf, then to the railway in Winfield. Nelson married May and they had two sons, Gilbert and Don.

Arthur and Ethel were childhood sweethearts and were married 71 years, until Ethel’s death in 2000. Art and Ethel moved to Penticton, then returned to Winfield in 1946 and took over the family farm. Art worked for the Kelowna Grower’s Exchange. He was a great baseball player, helping the Winfield team win three consecutive championships in 1925-27. Arthur and Ethel had five children: Shirley, Norm, Barbara, Frank, and Laurie.

Don Arnold grew up in Winfield, and in 1954 joined the UBC rowing team. In 1955 he rowed for the UBC Eights crew, winning the Pacific Coast Championships. In 1956, Don rowed for one fours crew in the 1956 Olympics in Melbourne, Australia, winning gold. His friend Wayne Pretty, also of Winfield, rowed for the second Canadian crew, which won silver. In 1960, Don’s crew won silver in the Rome Olympics. Don completed his Master’s Degree at University of San Francisco and PhD at Indiana University. He has taught at the University of Waterloo and at UBC in the Recreational Education Department. He has been inducted into the Canadian Sports Hall of Fame, the BC Sports Hall of Fame, and the Central Okanagan Sports Hall of Fame. 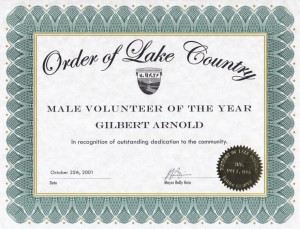 Gilbert was born here in 1928 and he married Jane Weddell, a teacher in Winfield, in 1950. Both were active in numerous community organizations throughout their lives, Gilbert was a member of the Winfield Fire Department, the Winfield Lion’s Club, the Winfield Memorial Hall Association and he assisted with the construction of Jack Seaton Park. Jane Arnold was active in the Women’s Institute and was a founding member of the Lake Country Heritage and Cultural Society. Jane originally suggested Okanagan Centre School would make a fine museum and she became the Society’s first secretary.

The Lake Country Museum owes much of its existence to Jane and Gilbert Arnold, not only for their active involvement with the Museum, but also for a generous bequest to support its operations. Lake Country Museum President Dr. Duane Thomson states: “The Arnolds are one of Lake Country’s earliest pioneer families and for more than 100 years have been instrumental in building our community. The Lake Country Museum is delighted to recognize their contributions with a permanent plaque.”

The Lake Country Museum and Archives recently honoured one of Lake Country’s pioneer families, the Arnolds, with a commemorative plaque. The Arnold Legacy was unveiled Saturday, June 8th 2013 at the Museum at a private event hosted by the Lake Country Heritage & Cultural Society’s Directors and Founding Members and attended by Don and Linda Arnold of West Vancouver, Barbara and Mike Dapavo of Kelowna and Norm and Edie Arnold of Kelowna.