Even though we grew up in a small, rural community we still had our dreams and at least for some, the opportunity to pursue them. So it was, forty-five years ago, for three young men from Lake Country. I know their story has been told before but not from my personal perspective.

I think the story actually began at Rutland Senior Secondary where we attended high school prior to George Elliot Secondary School (GESS) opening in the fall of 1959. That was the era of sock hops, with kids often dancing to the music of bands comprised of students. One band that I remember well was called The Emeralds and their lead singer was a talented vocalist from Oyama named Steve Davis. Steve was of the Dungate family and he loved to sing. He was often a part of our United Church Choir and even wrote our GESS school song.

Three members of the first George Elliot grad class, the class of 1960, started to sing together at local events. The three good friends were Steve, Jack McCarthy and Don Christian. One of their first “gigs” was playing at the Oceola Fish & Game Club banquet. As well, they performed in the Kelowna Little Theatre production of “Guys and Dolls”, as did a lovely young ballet dancer who is now my wife. To jazz up their performances they sometimes got help from local vocalists Trish and Lynn McCarthy.

In 1963 Steve received an invitation from Chet Atkins of RCA Records to bring a group to Nashville, and thus The Winmen trio was born. In the spring of 1964 Steve, Jack and Don followed their dream to Nashville, the virtual music centre of the United States. They recorded four songs, with the biggest hit entitled A Nickel Piece of Candy. While it didn’t go “gold” it became what was known as a regional hit, which it certainly was in this area. 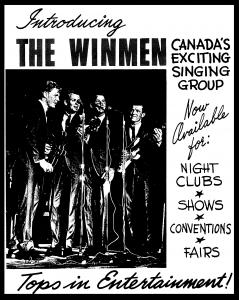 For our highly respected community builder and ex-newspaper publisher Jack McCarthy, those few glorious months in Nashville were mostly about the people they met and came to know. They were introduced by Chet Atkins to noted pianist Floyd Cramer and top guitarist Grady Martin who had formed their own label. Those two provided backup for their records as did one of the best known groups of the era, The Anita Kerr Singers.Those singers in turn went on to back up Brenda Lee, Perry Como, Roy Orbison and Willy Nelson among many other well known performers of the day.

Jack will tell the story of meeting “Jim the Janitor”, a very pleasant gent who was sweeping up around the recording studio. While attending a big music event they were surprised to find that he was none other than the legendary Jim Reeves. Jack also recalls one of his best beer-drinking buddies as Red Foley who wrote and recorded amongst others, the hit song “Old Shep”, later made famous by a guy named Elvis Presley. Another new friend was Sheb Wolley, best known for the somewhat offbeat hit, “One Eyed, One Horned Flying Purple People Eater”.  These were major recording artists, true characters…but down to earth enough to share their time with three somewhat star-struck young men from the Okanagan. Ironically, one song that our fledgling stars were offered didn’t immediately appeal to them. It was called, “Silence is Golden” which went on to be number one on the charts…unfortunately not for The Winmen.

The Winmen’s style was pretty much middle of the road with a repertoire of both folk and pop music. Alas, it wasn’t long before lack of Green Cards signalled the end of their Nashville experience and it was time to head back to Canada, even though they were still under contract.  Once home they were joined by a very talented rhythm guitarist from the Mission by the name of Bob Berger. The foursome entertained at such iconic clubs of the era as Izzy’s and The Cave in Vancouver, and performed at conventions in Portland as well as headlining at the Pacific National Exhibition.

In 1965 in Toronto, on Grey Cup Day, The Winmen decided it was time to pursue other dreams and so they disbanded. Jack and Don headed back West while Steve and long-time Winfield friend, Fred Larsen, decided to go it together. They went on to become The Hilites…but that’s probably another story.

Sadly, quiet, nice guy Don Christian died a number of years ago, and Bob Berger’s whereabouts and life story are not known. Steve long ago became Rhett Davis and he and wife, Laurie (Arnold), reside in Orlando, Florida, close to their children and grandchildren. Rhett continues to perform and his song I Am the Eagle won much acclaim. Jack McCarthy enjoys retirement on the farm that his father and grandfather owned before him. If any of his eleven grandchildren should ever ask; “What did you do when you were young, Grandpa?”, I hope he shares his story and this remarkable time in his life.